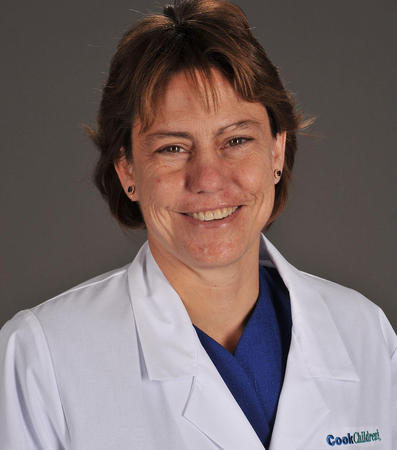 Anne Hackman, M.D., grew up in Indianapolis as the second of four children. She was diagnosed with a chronic illness at the age of three, which has required daily management throughout her life. She grew up admiring the physicians who helped her manage her illness and found ways, through acting as a counselor and later as a physician, to help other children with the same condition. Despite her condition, Dr. Hackman lettered in volleyball and basketball in high school and lettered in volleyball at Duke University.

Dr. Hackman joined Cook Children's Heart Center in 2007. She sees patients in clinics all over Texas four to five days a week, and occasionally spends time in the ECHO lab or taking care of our hospital patients.

Dr. Hackman chose pediatric cardiology because she knows how it feels to grow up with a medical condition and how important it is to use your strengths and talents to achieve your goals despite that condition. She also has a special insight into how a parent feels when their child has a chronic condition, and she is eternally grateful to her own parents for giving her just the right amount of sympathy mixed with frequent reminders of the blessings and talents she should be thankful for.

Dr. Hackman has a daughter who is heavily involved in Three Day Equestrian Eventing. She competes all over the country, and Dr. Hackman tries to catch a few competitions each year. They also enjoy traveling together without the horses! On the weekends, Dr. Hackman is involved with a ministry to help the homeless in Fort Worth.