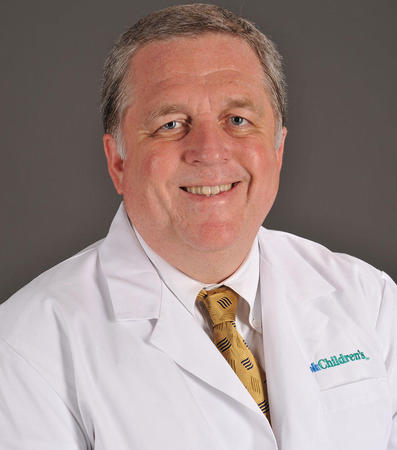 After graduating from medical school at The University of Oklahoma in Norman, Oklahoma, Dr. Brian Ryals spent nine years in the Army in residency training and service, followed by three years of service in the Army. He was content practicing as a pediatric neurologist in Colorado, with no intention of moving back to the Southwest. But in 1995, he saw a job posting for a neurologist at Cook Children's and everything changed. He decided to pursue the opportunity and interviewed with a Cook Children's neurologist over the phone. And, that's all it took. More than 20 years later, Dr. Ryals is now the medical director of Cook Children's Headache program within Cook Children's Jane and John Justin Neurosciences Center.

"I knew from the first moment I talked to someone at Cook Children's that I would be coming here," said Dr. Ryals. "I told my wife, 'This sounds like the nicest place in the world. This is the job I want to take.'" During his time at Cook Children's, Dr. Ryals has served on the Board of Trustees for five years. This involvement further confirmed for him that the patient truly is at the heart of everything we do at Cook Children's.

For that reason, Dr. Ryals has chosen to include Cook Children's in his estate planning and is a member of our Legacy Society. His giving will continue to benefit patients for generations to come. In addition to devoting his career to his patients and leading through the board, Dr. Ryals is also a member of Cook Children's Doctors Society, a giving society for physicians and dentists affiliated with Cook Children's. Through his support of the Children's Fund, a fund aimed at assisting with the health care system's greatest needs, Dr. Ryals is able to give back to the entire system, and to areas outside of his department that also care for his patients.

Dr. Ryals has seen how the generosity of this community has had an impact on his work, and on his patients. It has brought technology, equipment and resources. "There is a spirit of giving that you see everywhere here," he said. "You can't quite put your finger on it, but it's here and not a lot of places have that." Dr. Ryals says that his favorite part of his job is teaching families about their child's condition and watching them get better. Once they learn about the condition and how to deal with it, their anxiety and fear of the unknown fade. "No matter what you do ​- after you do it a thousand times, the technical thing that you're doing becomes fairly routine," said Dr. Ryals. "But the pleasure comes with, if you do it right, seeing someone get better. And it's a real privilege to see that."