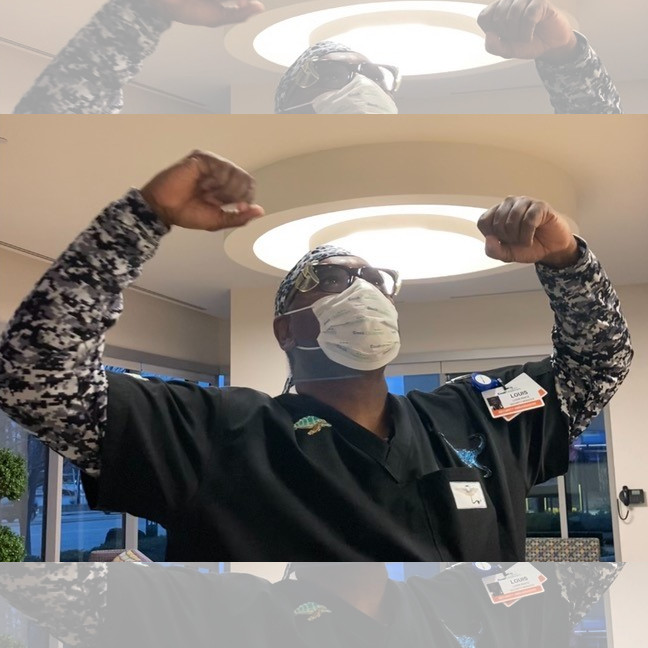 Whether it's Bruce Wayne, Clark Kent or Peter Parker, superheroes and secret identities often go hand-in-hand. But for our resident 'superhero,' Security Ambassador Louis White, he has no need for secrecy.

"Wherever I go, I have to represent everything that I stand for," Louis said. "I'm a representative of Cook Children's, of my true self, of the world and, most importantly, of God, our father. And there's nothing to hide."

And he has shown that sense of confidence and self with humility like a beacon in the night to our patients, families and staff for the last 23 years.

The Louisiana native's path to Cook Children's began with a simple visit to a friend's grandson who had been admitted to the hospital. Having worked in security for Neiman Marcus, he struck up a conversation with a Cook Children's security officer, who suggested this would be a great place for him.

"My initial answer was 'No, there'd be too much pain,'" Louis recalled. "But then I walked the halls and looked around at the faces here. I was so wrong. I wasn't picking up on pain here at all...just love."

"And, you know, that is the greatest power in the universe," he added. "Love is THE superpower and we all have it in us."

In his role as security ambassador, Louis is able to use that power frequently and enthusiastically by interacting with anyone, anywhere across the Cook Children's system.

"I go wherever I'm needed," Louis said. "It may be heading to Burleson to be a reassuring presence for families at our clinic while the nearby school deals with a crisis or sitting in a behavioral health group helping them see the beauty, love, goodness and kindness there is in the world."

Spoken like a true hero. But, rest assured, when Louis answers the call to be a strong, positive presence for those in need, it's not just others that are impacted. It's Louis himself.

"The patients think they need me but I need them too," Louis admitted. "Each of them is giving me a gift with the time we spend together because they make me want to be a better person. It's reenergizing and creates a connection between all of us."

For Louis, the epiphany of making meaningful connections dawned upon him about 10 years on the Transitional Care Unit with a patient recovering from a car accident.

"This young man was paralyzed and ended up being with us for several months, where I saw him virtually every day. It was a long road," Louis reminisced. With a pause and small crack in his voice, it was clear that this memory was just as vivid for him as it was a decade ago. "It still gets me right now. One day, he comes up to me in his wheelchair and says, 'Mr. Louis, guess what? I'm leaving.' Confused, I asked, 'Why are you leaving?' He told with a laugh, 'I'm better now, dude!' The tears just hit me."

After collecting his thoughts and emotions, Louis made sure that this young man knew how happy he was for him. "Then, I realized that's what our nurses see so often," he continued. "But I had never connected with a patient like that before. Now I understood how important it is to make those connections. It doesn't have to be months of interacting. It may just be a couple of times but we should use that time we have with one another to make true, genuine connections."

Ultimately, that ability to form connections with those around you that Louis describes and to show compassion and love to one another is within all of us, regardless of our role. When we tap into that and put it into practice, there's nothing we can't do because #WeAreCookChildrens.