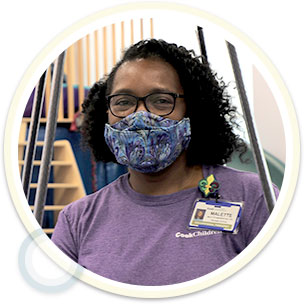 "Everything is therapy," Occupational Therapist Malette Washington said. It doesn't matter if it's a song or a game or just coloring a piece of paper, she embraces the idea that each little aspect of a child's visit can help with their treatment.

After nearly 19 years with Cook Children's and 30 years as an occupational therapist, there is definitely wisdom in these simple words from Malette.

On this particular day, as she walked into the waiting room at the Mansfield clinic, Malette happened to see a young mother and her fussy toddler having just checked in for an appointment. Without missing a beat, Malette began singing a quick song to get the girl's attention and engage with her before the appointment even began. "You know there's a song for everything," she said, "so you can usually find me singing something to my patients."

It's building that trust with the child and that relationship with the parent in each interaction that will make their therapy successful. Gratefully, she sees this family-centered care and approach across all of Cook Children's, which is what makes this place so special.

We've all likely heard the phrase: It takes a village to raise a child. Malette offered a revision that's perfectly fitting.

"I believe it takes a village to heal a child," Malette explained. "A child that starts out at the main hospital due to an injury or dire diagnosis and then goes through inpatient rehab with TCU/RCU. Finally, they come here to complete their treatment and we fully discharge them to a functional life. It's so rewarding to see them come full circle all right here and you can see that Cook Children's is just the village to heal that child."

Hailing from Louisiana and as a self-described "military brat, who married a Marine," Malette has called a few places home. But ultimately, it was her own kids that brought her to North Texas.

"When our kids were young, my husband really wanted them to see something different besides a small town," she recalled. "Obviously, we both had seen beyond the small town and wanted that for our kids."

After landing in Fort Worth and nearly two decades here, she's grateful that they did because the sense of community both away and at work is invaluable. Malette has no problem seeing what has separated Cook Children's, especially her tight-knit Rehab Services team, from other places she's been.

Having spent her early career as an occupational therapist for a school district, there was always a sense of isolation. "I covered 12 schools and there was a routine of going in, seeing a child, leaving and heading to the next school," she said. "With that being repeated daily, it was easy for me to feel very disconnected and alone. Here I have my peers to build this community and increase my skills and, hopefully, I can improve theirs too."

That inclusivity is treasured by Malette and she is happy to share her own experiences with her team as a reassuring guide for any new team member.

"Don't think that anyone is unapproachable and they do (and will) value your opinion," she advised. "If something is bothering you, talk to that person and work toward a solution together. Because that will be what's best for our patients."

It may be a 6-week-old who went from not being able to use her arms at all to being fully capable at 22 months old. Or it could be the child who can now copy from the board in his class. Every milestone is important. "Whether it's a big or small thing, they are all monumental for the families and that child," Malette said. "And we are a piece of that."

But she recognizes they don't work in a silo. "There are lots of intricate pieces, like a Rubik's Cube," Malette explained. "The total collaboration within your own team and with others, the integrity of the staff, the caring for and sharing with each other and everyone's overall heart being in it. All these combined make it possible to come up with that perfect solution for a patient."

So, just as Malette sees her and her team's place in this puzzle, we should all recognize that together we can solve the problem that faces our patients and their families.