Magnetoencephalography (MEG) is a non-invasive electrophysiological imaging technique that measures the magnetic fields generated by the human brain. MEG is performed using a magnetometer, a specially designed tool (i.e. coil) that records minute magnetic fields in the range of femto-Tesla (1015) to pico-Tesla (1012). MEG offers an excellent temporal resolution in the range of sub-milliseconds and a very good localization (spatial location) accuracy of a few millimeters, especially for superficial cortical sources.

MEG recordings are based on the phenomenon of electromagnetic induction (also known as Faraday's law) which is a process where a conductor (i.e. pick-up coil) placed in a changing magnetic field causes the production of a voltage across the conductor (Fig. 1, bottom left). The amplitude of this voltage is instantaneously proportional to the magnetic induction’s and readily measurable. 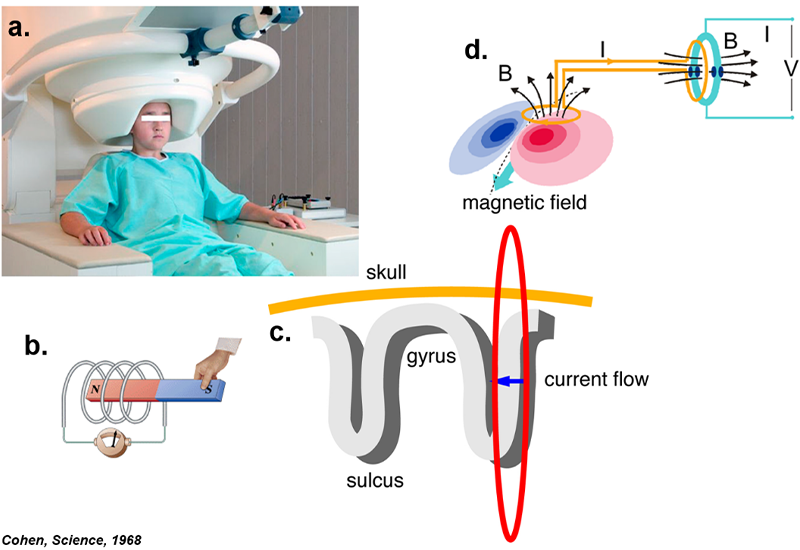 Figure 1: MEG recordings and their principle. Top left: During a MEG recording, the child places his/her head inside a specially designed helmet that accommodates the magnetometers. Top right: MEG recordings are based on the phenomenon of electromagnetic induction according to which any change in the magnetic field can be measured by a nearby coil. Bottom: To generate a MEG signal that is detectable, approximately 50,000 active neurons are needed to be active almost simultaneously. These neurons generated an electric current that produces a magnetic field, which is measurable outside the head with a magnetometer. The magnetometer is sensitive enough to measure this weak activity and convert it to voltage.

There are three separate basic neuronal events that are likely candidates to generate a measurable magnetic field (Fig. 2). Out of these three events, the postsynaptic ionic currents flowing in the dendrites during synaptic transmission contributes the most in the generation of the MEG signal. Approximately 50,000 active neurons with similar orientations are needed to reinforce each other in order to generate magnetic fields, that can be measured with MEG outside of the human scalp. Such a configuration can be found at the layer of pyramidal cells (pyramid-shaped neurons that are the primary excitation cells in the cortex), which are situated perpendicular to the cortical surface. Bundles of these neurons that are orientated tangentially to the scalp surface project measurable portions of their magnetic fields outside of the head, and these bundles are typically located in the sulci (grooves at the surface of the brain, Fig. 1, bottom right). 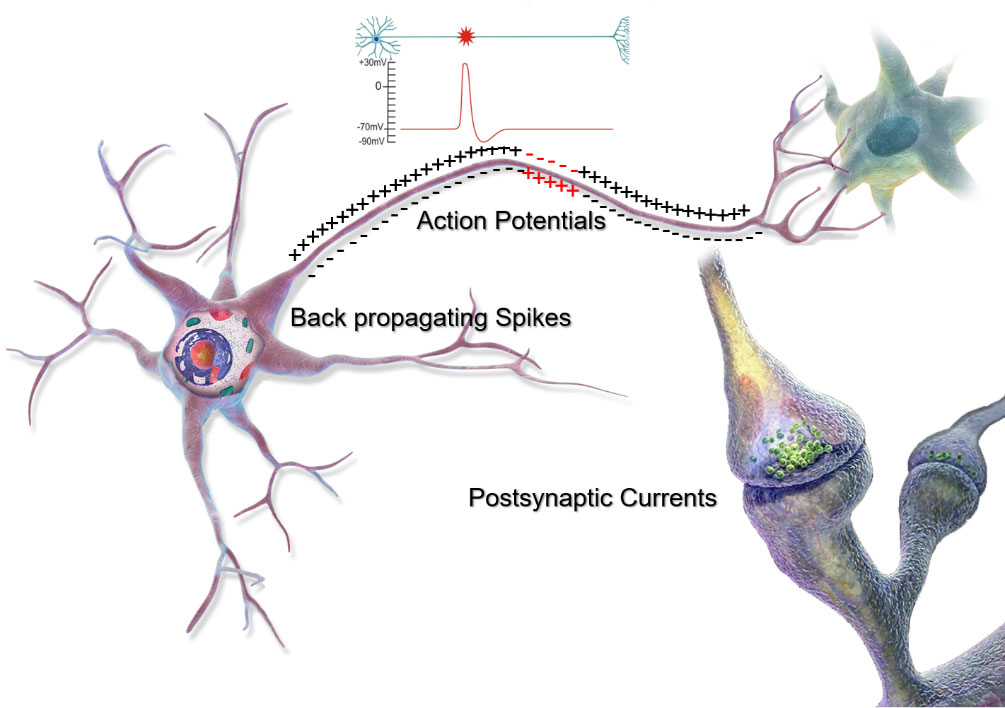 According to the equations of Maxwell, any electrical current will produce a magnetic field; it is this field that is measured with the MEG. These magnetic fields are on the order of 10 picoTesla to 10 femtoTesla (1 × 1011 T − 1 × 1014 T). For comparison, the magnetic field of the earth is ~50 microTesla (0.5 × 10-4 T) (Fig. 3). The postsynaptic ionic currents flowing in the dendrites of neurons can be modeled as a current dipole, i.e. a current with a position, orientation, and magnitude, but no spatial extent. 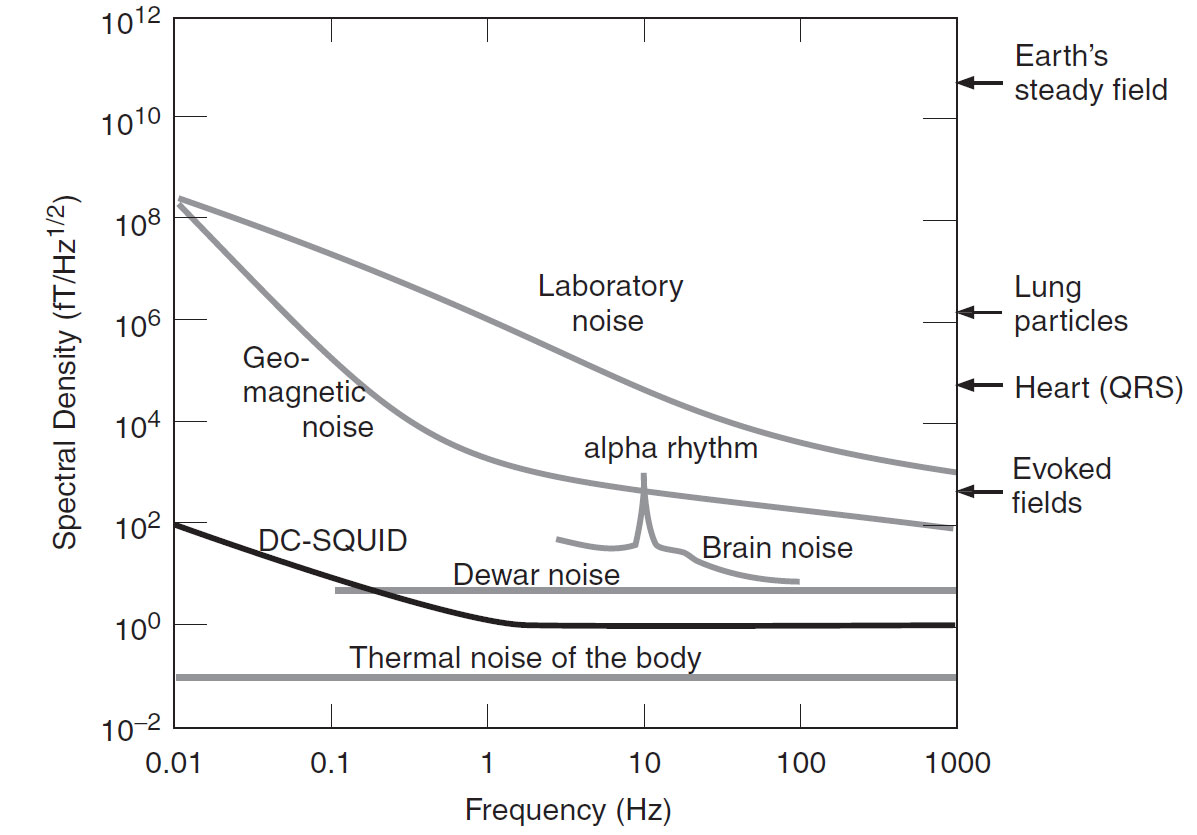 MEG is usually combined with a magnetic resonance imaging (MRI) to get what is called magnetic source imaging (MSI), which offers precise localization of brain activity millisecond by millisecond. MSI is often used in clinical practice for the precise localization of epileptogenic tissue in patients with epilepsy who are unable to control their seizures with seizure medications (Fig. 4). MEG is also used for the localization of eloquent areas (cortical regions that, if removed, result in loss of sensory, language, or motor ability) in the human brain during presurgical mapping. In research, MEG is used to help us understand the function of the human brain and to monitor functional brain plasticity in response to rehabilitation. 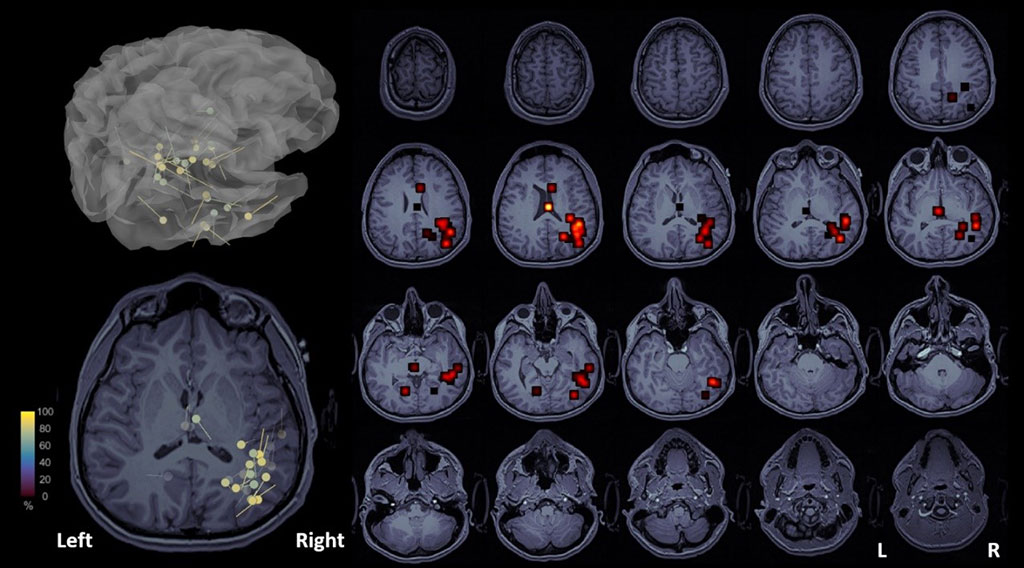 Magnetically shielded room (MSR): Since the magnetic signals emitted by the brain are on the order of a few femtoTeslas, shielding from external magnetic signals is necessary. The shielded room minimize the interference from external electromagnetic sources (i.e. power lines, radiofrequency signals from portable devices, electrical devices and computers, magnetic fields from moving magnetized objects such as cars, elevators and trains, Fig. 3). This magnetic shielding can be obtained by constructing rooms made of aluminum and mu-metal (a nickel–iron soft ferromagnetic alloy with extremely high permeability) for reducing high-frequency and low-frequency noise, respectively (Fig. 5, left). These rooms are called magnetically shielded rooms (MSR); they consist of nested layers each made of pure aluminum and pure mu-metal (Fig. 5, left). 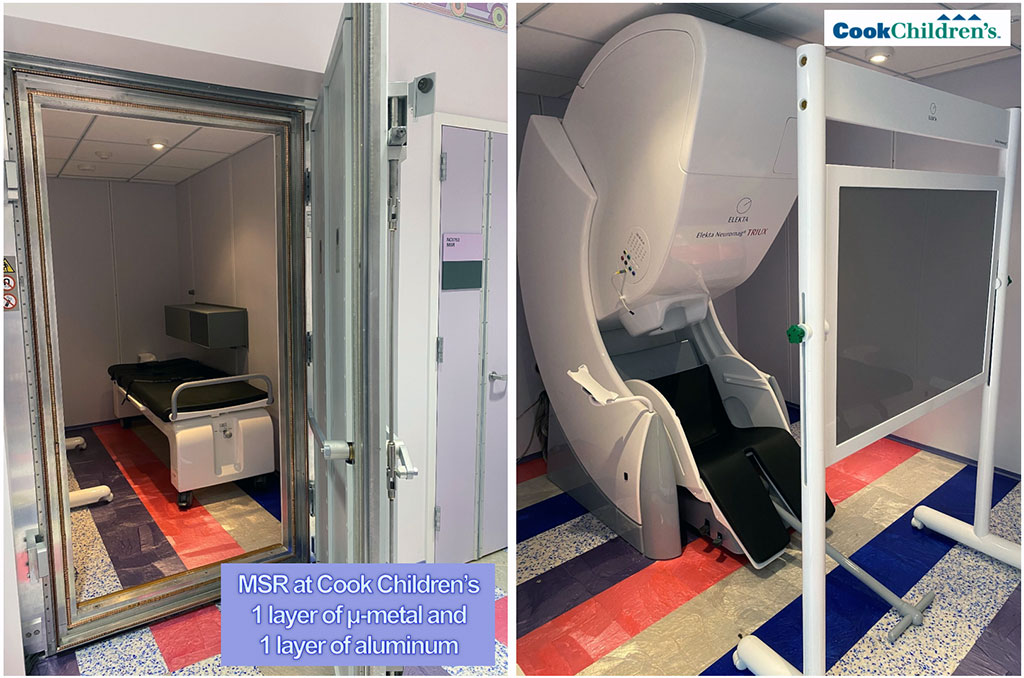 Figure 5: Magnetically Shielded Rooms protect MEG recordings from ambient noise. Left: The MEG system is located inside MSRs, which are made of different layers of aluminum and mu-metal; Right: Elekta Neuromag Triux 306 sensors MEG system at Cook Children’s located inside the MSR.

Our magnetometer is located inside an MSR where the recordings are performed. The MSR is equipped with adjustable lighting and an audio-visual communication system that allows communication with the researchers seated outside. Brain activity is measured by positioning the child’s head inside a helmet that contains 306 magnetic field detection coils (102 magnetometers and 204 planar axial gradiometers), which are inductively coupled to very sensitive magnetic field detection devices called superconducting quantum interference devices (SQUIDs). The assembly consisting of a detection coil and a SQUID is made of superconductors, which lose electrical resistivity below a critical temperature, near the temperature (-268.95 °C) of liquid helium. In order to maintain such a low temperature, MEG uses liquid helium that is stored in a specially designed tank. SQUIDs convert the magnetic flux passing through the detection coils into voltage changes. These voltages are recorded in a high performance computer and stored for analysis.

MEG signals were first measured by David Cohen in 1968 at the University of Illinois. This first recording was performed inside a MSR using a copper induction coil as the detector (Fig. 6). The coil detector was barely sensitive enough, resulting in poor, noisy MEG measurements that were difficult to use. Later, Cohen built a much better shielded room at MIT, and used one of the first SQUID detectors, just developed by James E. Zimmerman, a researcher at Ford Motor Company, to again measure MEG signals.

At first, a single SQUID detector was used to successively measure the magnetic field at a number of points in succession around the subject's head. This was cumbersome, therefore, in the 1980s, MEG manufacturers began to arrange multiple sensors into arrays to cover a larger area of the head. Present-day MEG arrays are set in a helmet-shaped vacuum flask that typically contains approximately 300 sensors, covering most of the head. In this way, a MEG of a subject or patient’s entire head can now be collected rapidly and efficiently. 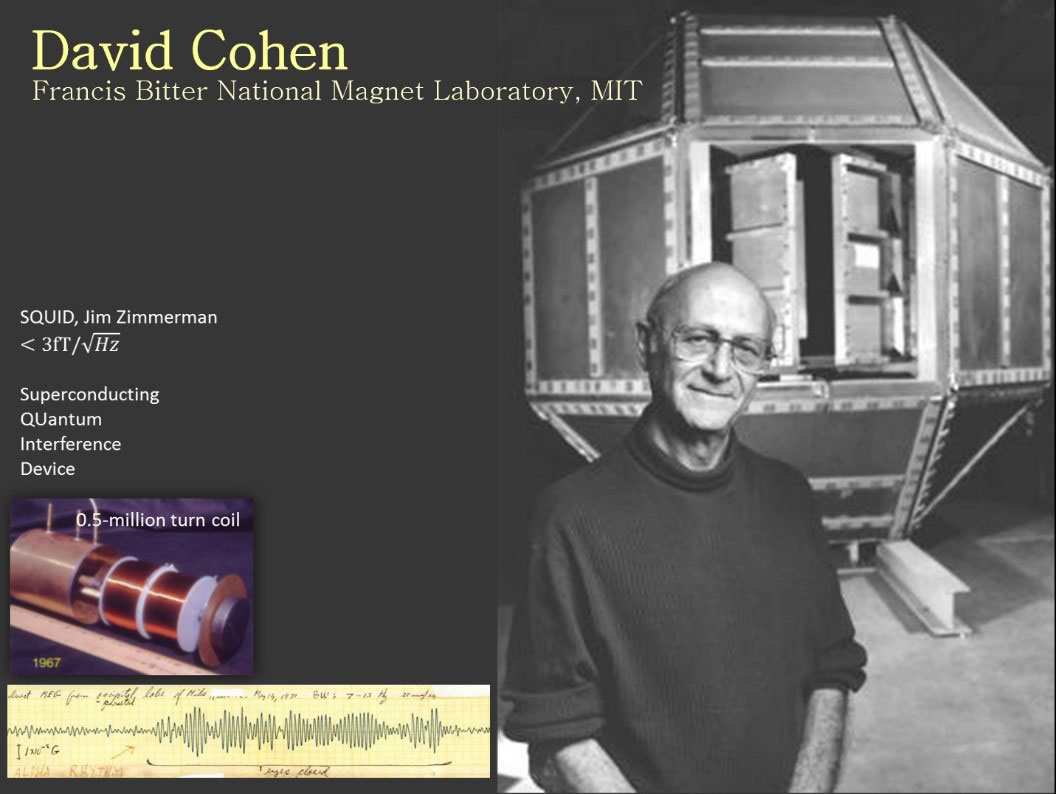 The child’s preparation is minimal, and the experiment is well tolerated. The entire session lasts about 2–3 hours with the actual measurements lasting around 60 minutes, depending on the study. In some cases, we ask parents to bring the child sleep deprived by either skipping a nap or waking her/him up earlier in the morning, and let the child go to sleep in our facility once the preparation procedure is completed. For research studies, we never use sedation for the recordings.

After completing the consent process, children may change their clothing to a non-metallic hospital gown. We then place specially designed coils on the child’s head, which are used to locate the position of child’s head with respect to the MEG sensors. The child’s head is then digitized with the FASTRAK digitization system, which reconstructs the child’s head shape. The child will be asked to sit on a chair where the FASTRAK transmitter is attached. The FASTRAK receiver is placed securely on patient’s head using specially designed goggles. The researcher then uses the stylus to digitally mark the basic anatomical landmarks on the child’s face and behind their ears (Fig. 7). Beyond the basic anatomical landmarks, additional points are also recorded to provide the best possible localization precision.

When the child’s preparation finishes, we accompany the child inside the MSR. The child either sits on a comfortable chair or lies down on a bed and places their head inside the MEG helmet (Fig. 8). Parents can monitor their child via a TV screen located outside the MSR. The parent or a research assistant can be in the MSR during the recording. During the experiment, the child can watch their favorite movie on a screen placed in front of them. 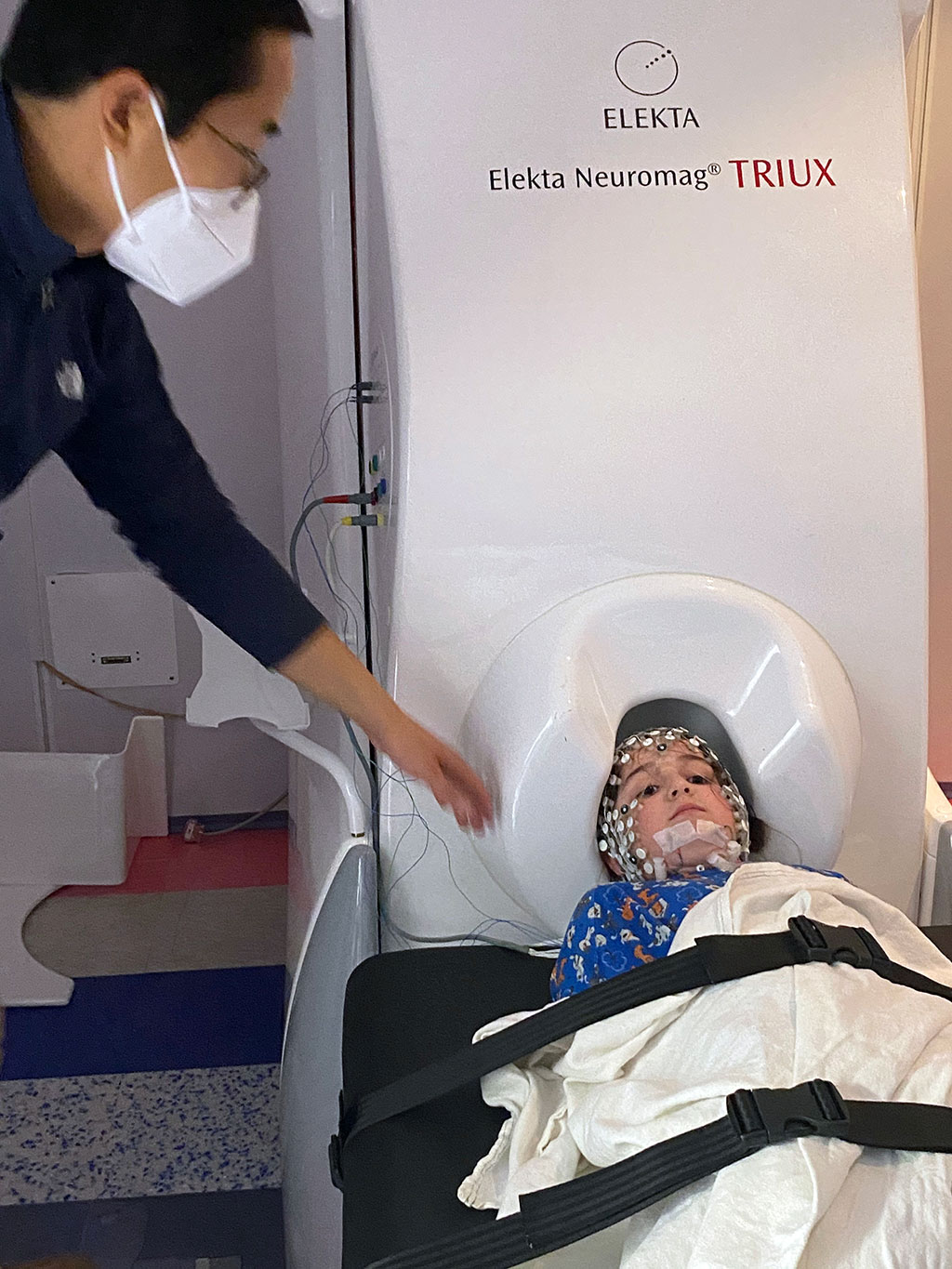 Advantages and limitations of MEG

Compared to other neuroimaging methods, MEG presents a unique set of significant advantages. Compared to electroencephalography (EEG), preparation for a MEG recording is faster and easier. With MEG, the brain activity can be measured immediately after placing the child’s head inside the special helmet since there is no need to attach any sensors to the head. Unlike EEG signals, MEG signals are not distorted by skull conductivity. MEG is also less distorted than EEG by unfused regions of the cranial bone such as fontanel or suture. Moreover, MEG signals are reference free providing absolute measurements of the magnetic field produced by the brain, in contrast to EEG, which provides potential differences between two locations. MEG signals can be measured with a high density of magnetic field sensors. In contrast, EEG always faces the problem of “bridging” between electrodes, meaning a salt bridge is created by the electrolyte/conductive solutions touching each other between electrodes in close proximity to each other. This can occur more often in children or anyone with a smaller head. Both EEG and MEG have excellent temporal resolution and very good spatial resolution (Fig. 9). 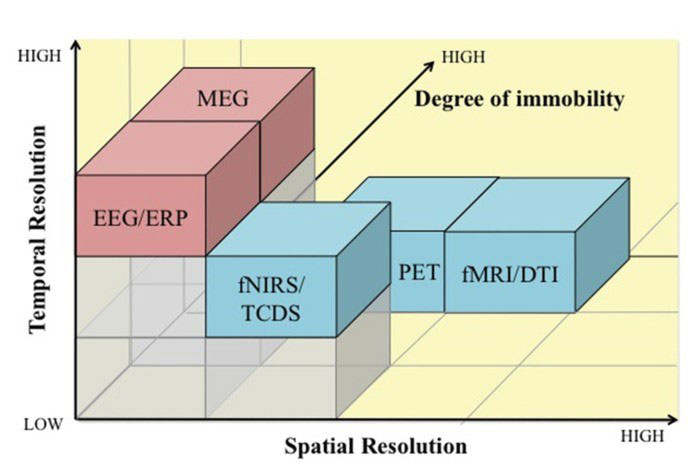