Transcranial magnetic stimulation (TMS) is a non-invasive brain stimulation technique used to evoke an electric current by changing the magnetic field in a specific area of the brain via electromagnetic induction. Specifically, a stimulator is connected to the TMS magnetic coil (wand-looking device), which can be turned on to generate an electric current that then induces a magnetic field (Fig. 1). That magnetic field inverts the electrical charge within the brain, thus causing a brain response in the targeted area. For example, stimulating the part of the motor cortex that controls hand movement causes the thumb to move. 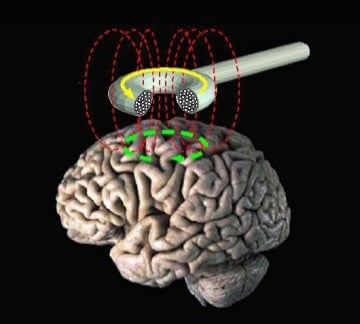 Figure 1. Schematic of magnetic field created by TMS coil which acts upon a targeted region the brain inducing an electromagnetic change and electrical current.

TMS is used as a tool for neurological diagnostics and treatment of psychopathology by mapping the brain regions responsible for specific functions in individuals.

Given that TMS is one of the few currently available non-invasive brain stimulation techniques, it has been gaining popularity in research studies, pre-surgical planning, and therapeutic applications in recent years. In brain research, the causal relationships between behaviors and brain functions are often challenges to be unraveled. In addition to mapping brain function, TMS offers a unique non-invasive “virtual lesion” to transiently disrupt the function of a targeted brain area, which is critical in determining the functional significance of the targeted area and the causal relationship between focal brain activity and behavior. For instance, by applying single-pulse TMS to the motor cortex during the plateau stage when participants are learning a motor task, researchers can determine how critical the motor cortex is in the consolidation of motor memory.

Besides the capability to transiently interrupt focal brain activity, TMS can function as an objective tool to quantify brain excitability and plasticity. Single-pulse TMS delivered to the motor cortex can evoke motor-evoked potential (Fig. 2), which has become a key indicator of motor cortex excitability and good integrity of the corticospinal tract. In other words, a single-pulse from the TMS to a specific area of the brain can cause the body part controlled by that area to move. When two TMS pulses are paired and delivered to the same spot, intracortical excitability and plasticity can be reliably measured. Paired pulse stimulation can be delivered using different inter-pulse intervals to assess cortical excitatory and inhibitory mechanisms. When two TMS pulses are paired and delivered to different spots, interregional functional connectivity can be assessed (how well the two areas communicate). For instance, paired pulse TMS can be delivered to left and right motor cortices to assess interhemispheric inhibition or to the cerebellum and motor cortex to evaluate the integrity of cerebello-cortical pathways. These TMS-derived measures have been increasingly applied in research studies and clinical assessments to evaluate cortical excitability, plasticity and connectivity. 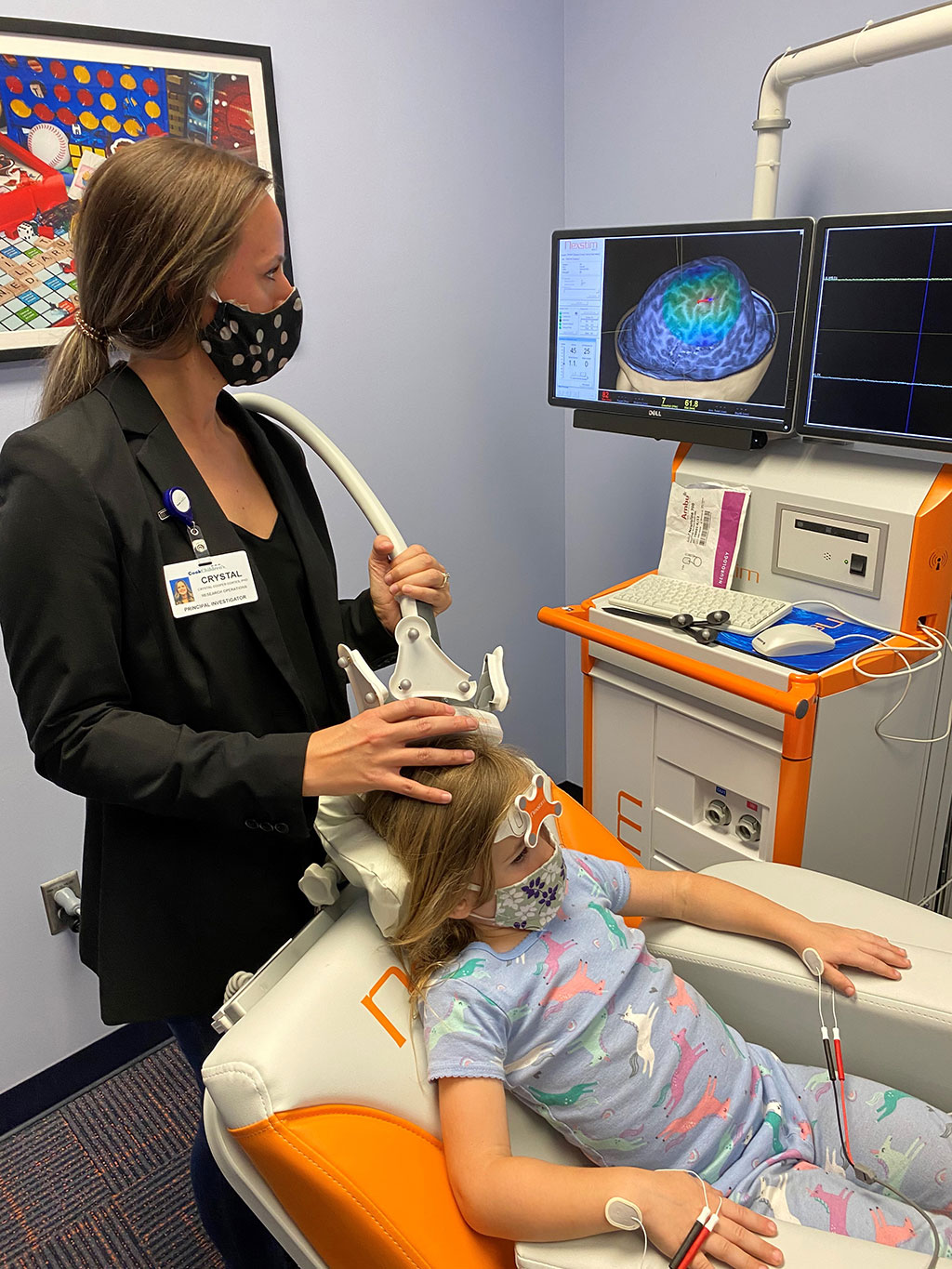 Besides the wide use in research studies, TMS has also been applied in clinical services. A popular use of TMS is in therapy. Since FDA approval for TMS in treating medication-refractory depression, TMS has become an accepted and popular method for treating patients with stubborn depression. The FDA has also approved the use of TMS in treating obsessive compulsive disorder. In the therapy of stroke patients and patients with movement disorders like Parkinson’s disease and dystonia, TMS has been explored solely or in combination with physical therapy or motor training. Therapeutic use of TMS is aimed at inducing long-lasting brain plasticity. To achieve this, repetitive pulses of TMS are delivered to a brain area. The frequency of pulse repetition is a critical factor to induce excitatory or inhibitory effects.

TMS has also become an option in pre-surgical brain mapping. Neurosurgery intervention of brain diseases attempts to resect some portions of brain with abnormalities but maximally preserve brain functions. TMS can be used to map the eloquent areas of the brain and identify boundaries of functional areas. It has been shown to be reliable in mapping motor cortex and provides promising results for language mapping.

Figure 3: Top left: Nexstim TMS machine with the adjustable chair and headrest for the patient. Bottom left: TMS coil that is held directly over the head, this contains the coil that creates the magnetic pulse Top right: The head tracker is placed on the patient’s forehead which communicates to the TMS where the patient’s head is located in relation to the coil. Bottom right: Electromyography (EMG) leads are placed on the hand to measure muscle movement when the magnetic pulse is delivered.

The foundations for the field of electrophysiology have been around since the late-18th century. The use of electricity to stimulate the brain had been around since the late-19th century, but it was not until the 1930s that electroconvulsive therapy (ECT) was used to treat various mental disorders (Fig. 4). While still in use today, other treatments are preferred prior to ECT, which has become a last option for treatment resistance due to its various side effects.

It was in 1830s that Michael Faraday discovered that electrical currents had corresponding magnetic fields and that one could be induced by changing the other. This discovery, in line with the development and use of transcranial electrical stimulation to stimulate the motor cortex in 1980 which was very uncomfortable, led Anthony Barker to successfully explore the use of magnetic fields to alter electrical signaling in the brain. The first stable TMS device was introduced in 1985.

While TMS devices were originally used for diagnostics and research, their use as a treatment device was approved by the US Food and Drug Administration in 2008. 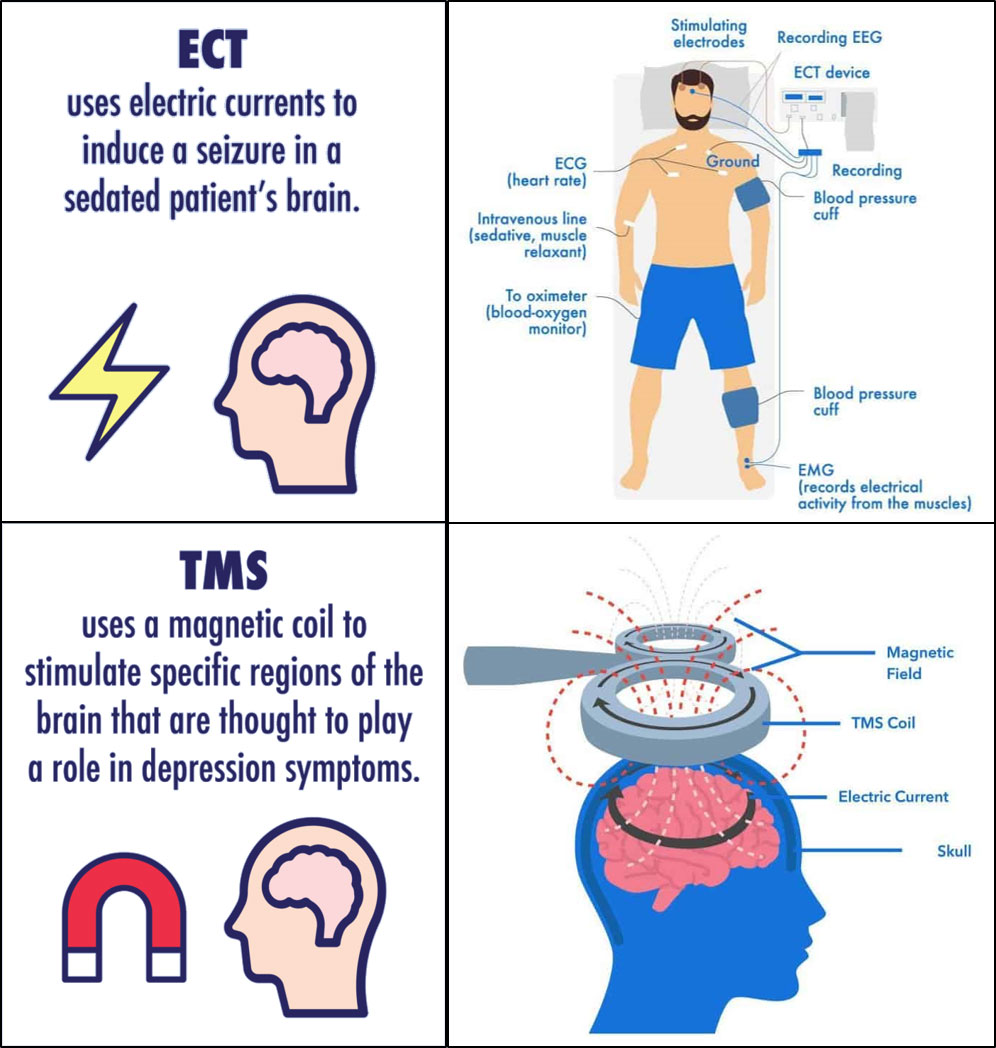 After consent, the parent and the child is informed on what can be expected during the TMS. The TMS preparation is very minimal. The child will sit on a large comfortable chair, leaning back slightly. The child will then have electrodes places around their thumb and wrist, which allows us to record thumb movements when the motor response occurs during stimulation. A head sensor will be put on the child’s forehead and spots around their head will be digitally registered so the MRI image can be aligned with TMS stimulation. Lastly, the technician will use the TMS coil to simulate the brain to get the child’s thumb to move (Fig. 5). TMS sessions will last about an hour. The child is free to watch cartoons or the like during the session.

TMS enables targeted non-invasive brain stimulation and can be used in both research and clinical settings. It provides focused stimulation and is tolerable to most groups from children to older adults. Overall it has minimal risks but could cause problems such as short-lasting headache, neck pain, and seizures (only with repetitive stimulation). It’s efficacy in changing brain excitability could be affected by factors such as sleep and caffeine and can show high variability with some individuals not responding to TMS. As a non-invasive brain stimulation technology, TMS can only reliably stimulate cortical areas but is not capable of changing activities in sub-cortical areas such as basal ganglia. Specialized TMS coils have to be used to stimulate deeper areas like insula and the cerebellum.

Use with other techniques

TMS can be combined with EEG and MRI to provide better temporal and spatial resolution for understanding brain activity and aid localization. Specifically, simultaneous TMS-EEG can provide information to the network elicited by TMS pulses. Using structural MRI with TMS allows a more precise location for targeting areas for treatments.