Sucking and swallowing skills develop in utero as the fetus regulates amniotic fluid levels and further develops ex utero to incorporate breathing. Early in the investigations of infant’s sucking it became clear that there are two distinct types, nutritive and non-nutritive sucking. As an infant gains more experience, these sucking patterns mature in strength and efficiency. Non-nutritive sucking (NNS) is the primary pattern seen when an infant sucks on a pacifier, their thumb, or other objects, while nutritive sucking (NS) is the primary pattern seen when an infant is sucking to feed (either bottle or breast). There are two main components to sucking, suction and compression/expression (Fig 1). Each of these two components can be measured fairly easily, making the quantification of sucking behavior and maturity possible.

Figure 1: Skills required for sucking in infants. Left: Infant at rest with the nipple inside the mouth; Center: Suction applied to the nipple to draw further into the mouth to form a teat and the tip of the tongue beginning to compress it; Right: Expression of the teat by the tongue movement against the hard palate.

The coordination of swallowing, breathing and sucking is an enormously complex sensorimotor process, requiring five cranial nerves, at least 26 pairs of muscles, the cervical and thoracic spinal cord as well as at least 10 discrete brain areas. Due to the rhythmic nature of the suck-swallow-breathe process, these motor functions are controlled by central pattern generators (CPGs). The CPGs are found in the brainstem, specifically the upper medullary and pontine areas, and have been shown to be capable of generating a basic swallow without other input. CPGs are at the core of this complex system. A second level of controls is comprised of subcortical structures including the basal ganglia, hypothalamus, cerebellum, amygdala and tegmental area of the midbrain with a third level in the suprabulbar cortical swallowing center. Figure 2 is a graphic representation of the brain network that coordinates sucking and swallowing. For a more in depth review, see Mistry and Hamdy 2008, S. Barlow 2009, Maynard, et al. 2020.

Figure 2: Sucking and swallowing brain network. The black arrows on the right, coronal view of the brain indicates the complex integration and communication between the areas in only one hemisphere for simplicity, though it happens in both sides. CPGs (blue) are at the core of this complex system. A second level of controls is made up of subcortical structures including the basal ganglia, hypothalamus (pale olive green), cerebellum, amygdala (purple), and tegmental area (pink), of the midbrain with a third level in the suprabulbar cortical swallowing center and insula (green). The cranial nerves (CN) required for the motor process of feeding and swallowing include CN V, VII, IX, X and XII.

Some longer-term studies have found a relationship between feeding performance and neurodevelopmental outcomes. For example, one group found a significant correlation between improved NS patterns over two examinations performed two weeks apart and better neurodevelopmental outcome at 18 months of age. A second group measured NS parameters at 34 and 40 weeks post-mentrual age (PMA) and found a more mature NS pattern lead to a better developmental score at 12 months of age.

A correlation between microstructural abnormalities in the brain and sucking pattern variations has been shown. That pilot study demonstrated the potential to identify brain injury through the analysis of nutritive sucking. The researchers used the nfant Feeding Solution®(nFS) to investigate the relationship between nutritive sucking and brain abnormalities (injury). Results indicated that specific sucking parameters were correlated with how well the neurons were working that control neonatal oral feeding. Therefore, quantitative assessment of sucking at the bedside could potentially result in earlier diagnosis of diffuse white matter brain injuries. Identifying brain abnormalities while in the NICU could serve to inform NICU care and take advantage of neural plasticity when the benefits would be greatest.

The nFS (Fig. 3, top right) consists of a disposable nfant coupling that connects a standard bottle to a standard nipple. The coupling houses a lever mechanism for measuring tongue movement on the nipple. The nfant SSB Sensor connects to the coupling and wirelessly transmits real-time data on nipple movement to a tablet via the nfant Mobile App. Following a feeding, waveforms of the nipple movement (Fig. 3, bottom right) are transmitted to the HIPAA protected nfant Cloud Database and the signal is converted via custom algorithms, to identify key features and measures that describe sucking performance.

Figure 3: Infant Feeding Solution® (nFS). Left: Infant being fed with the nFS, with the tablet in the background. Top, right: The coupling, in purple, is disposable and connects the feeding bottle with the nipple (most standard NICU bottles and nipples will fit). The lever protrudes into the nipple and as the infant’s tongue moves the nipple to feed, the sensor relays the activity to the tablet via Bluetooth, which displays the activity as a waveform (bottom, right).

One of the earliest known reports of quantifying neonatal sucking was published in 1865 by Herz, who measured negative intraoral pressure using a mercury manometer attached to a nipple. Other similar methods for quantifying early sucking can be found in the literature from the late 1800s through to the early 1900s. More recently, there has been an increasing number of technological solutions to advance the quantification of sucking activity.

The Kron Nutritive Sucking Apparatus, or KNSA (Fig. 4, top left), developed in the 1960’s had a specially constructed nipple fused at the tip with rubber tubing that required negative intraoral pressure (active sucking) to release the flow of liquid. The Nutritive Sucking Apparatus, or NSA (Fig. 4, left middle), in the early 2000’s was a variation of the KNSA which houses a unit between a standard bottle and nipple that includes a pressure sensor, a signal processor and an on board flash memory drive. Also in the early 2000’s, to better understand the relationship between sucking, swallowing and breathing, Mizuno & Ueda (Fig. 4, bottom) modified bottle nipples routinely used in the nursery, to measure negative intraoral pressure. A silicone tube was inserted inside the nipple and connected to a microsemiconductor pressure transducer which allowed the level of milk flow to be dependent on the strength of the suction and expression by the infant. The orometer (Fig. 4, top right), developed around 2010, included an analytical system that collected 40 metrics related to suction and identified seven factors that represent feeding skills: suck vigor, endurance, resting, irregularity, frequency, variability and bursts. The SUMOD (Fig. 4, middle right) built on this around 2015, to incorporate measurement of both suction and expression/compression. 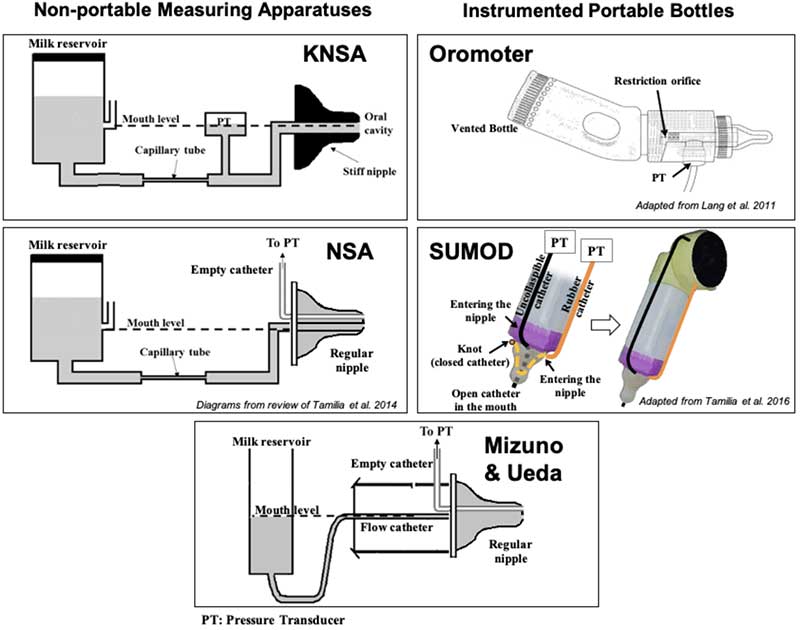 A visit including nFS does not require any additional preparation outside regular feeding procedures, and can be performed inside the NICU in accordance with the normal feeding schedule. The sensor and tablet must be synced and the lever calibrated before the feeding can begin. The bottle usually used for feeding can be warmed and the formula or breast milk can be thickened if required. The coupling with the sensor is then screwed onto to the bottle and the nipple screwed onto the coupling over the lever. The infant is then fed in the position most advantageous to them. The session may be video recorded with a small action camera for research purposes to document the feeding.

The major advantage of nFS is its portability and ease of use. It does not require extensive equipment, cables or wires and can be used with most common nipples and bottles in the NICU. It is FDA approved, and can be used inside the NICU. However, it only measures tongue movement, or the expression/compression component of the suck, but not the suction component.