This Tanzanian saying holds a special place in the heart of Barbara Peace, director of the Magnet Program at Cook Children’s.

"This really is what I try to live by because we truly can go farther in life when we take like-minded people along with us," Barbara said. "And this journey to Magnet re-designation from the American Nursing Credentialing Center is a perfect example of how far we can go together."

It was almost exactly one year from the time Barbara transitioned into a new role to start writing the Magnet application to our virtual site visit. So, that motto of hers actually checked off both the "fast" and "far" boxes.

"Normally, it’s a 17-month application process and we only had three-and-a-half months, plus the site visit preparation went from the average of 12 weeks to only seven weeks for us," she explained. "It’s easy to see that there is no way this would’ve been possible without everyone’s help."

While most people would be petrified of such a daunting task, for Barbara, she is drawn to anything that lets her step outside of her comfort zone. Whether learning to do the trapeze ("just because I was curious") or traveling to every continent but Antarctica, she is ready to tackle any challenge and this Magnet journey definitely fit that bill.

Barbara compared it to sitting base camp of Mount Everest looking at the top and thinking, "How am I going to get there...I don’t think I even have oxygen."

She explained, "Don’t ever tell me that something isn’t going to happen because I’ll do everything in my power to make it happen. Thankfully, it wasn’t just everything in ‘my power’ because I had this incredible team walking alongside me."

Indispensable to her was a host of Magnet Champions, who represented all inpatient areas, as well as some outpatient representation. The newly created roles of Magnet Ambassadors served as the liaison between the Magnet appraiser and the champions giving the virtual tours.

Fittingly, the excellence that a Magnet designation celebrates was on full display with this massive and accelerated endeavor. "Everyone was positive and focused from day one to the site visit," Barbara said with a beaming smile. "There was just an eagerness and enthusiasm from everyone to make this happen; quickly and freely throwing their support and offering their perspective to help tell our story."

The fruits of all that labor were clear when the time arrived for the visit and even the nervousness from experienced nurses was eased.

In preparing for her interview, Ashley Miller, one of our PICU charge nurses, was anxious about her interview with an appraiser but all the prepared materials, like our Magnet boards in the units, reassured her.

"Seeing it all in one place...in one snapshot revitalized Ashley," Barbara said. "And that’s the culture of excellence I want to be felt by our nurses all the time. It should be ubiquitous and prominent day-in and day-out and not just during a Magnet visit."

The preeminence that Magnet represents for nursing has always been a priority for Barbara, even as a new nurse straight out of Johns Hopkins University. "Nearly eight years ago, I remember being in my nurse residency interview and they asked, ‘Did you know we are a Magnet hospital?" she recalled. "I said, "Yes, I did because I only want to work at a Magnet hospital." Doing her homework on what each offered and narrowing her list of possible hospitals, Cook Children’s stood out on paper but the reality of this being her place would be clear almost immediately after stepping on campus for that interview.

"As I walked through the entrance near the Child Life Zone, I turned the corner and was moved by what I saw," she reminisced. "There was this boy in the recording studio hooked up to this IV pole and pumps, just jamming and crushing it on guitar. He was just being a kid without a care in the world. At that very moment, I thought, ‘Where’s the line for me to sign on? This is what I’ve been looking for.’"

And the idea of what she was looking for had been planted half a world away in Tanzania when she made the decision to become a nurse.

Having grown up in Connecticut and gone to college initially as a pre-med student, Barbara took a hiatus before beginning medical school and pursued a master’s in public health. While working on her thesis about the efficacy of an HPV vaccine, she headed to Northern Tanzania, which had the highest rate of incidence of cervical cancer in the world. For almost three years, she immersed herself in the work of genotyping to determine the HPV strains that the vaccines would cover.

Then, one day after a week’s worth of regular hours in clinics and rounding at the hospital, a local nurse invited Barbara to go out to an outlying village to visit with people. 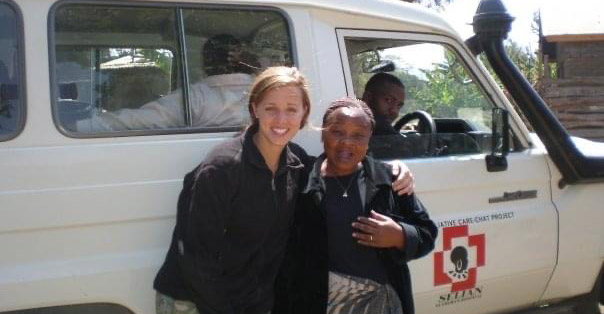 "One of our nurses, ‘Mama Hope,’ brought me along to a village to check on people," she explained. "That visit with Mama Hope seeing her just being present with patients, talking and listening to them was transformational for me. We didn’t even have medicine with us, just some oranges and high caloric flour. Even after all that time with her, Mama Hope never told me her real name. I guess it didn’t matter though because ‘Hope’ through compassion is what she brought to them; so that was a perfect name for her. I knew I wanted to help others and be a nurse that connects with people like Mama Hope."

As she looked back at that inspirational time in her life, it’s affirming that Barbara would choose here to elevate nursing in the spirit of Mama Hope. "Every day, we get to see the impact we make with the smiles on the faces of the kids," she said. "Cook Children’s is a place of hope and healing. We not only help heal their bodies but care for their spirits and give hope to their families."

Such dedication to our patients, their care and, even the culture of excellence amongst each other, is not exclusive to Barbara and it shows in our latest, distinguished fourth Magnet designation.

Through each person here, each accolade earned and each honor received, we can all proudly proclaim #WeAreCookChildrens.