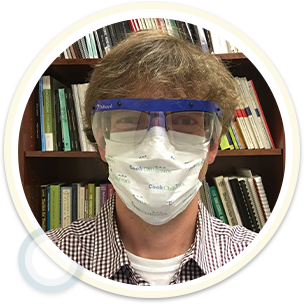 Quick question: Do you know where you were when you realized what you wanted to do in life?

While many of us may not be able to pinpoint that moment, for applied behavior analyst Lee Mason, the answer is an orphanage in Seoul, South Korea, during Spring Break.

"During my first year at Trinity University, I visited a high school buddy who was spending time in Seoul volunteering at the orphanage he was adopted from," Lee recalled. Spending that week, sleeping on his friend's floor, Lee had his first exposure to people with disabilities.

"It was primarily recreational interactions, like playing basketball, getting pizza or something like that. Just very natural and relaxed," Lee shared. "It just resonated with me."

Fortunately, this experience came at a pivotal time for Lee as a college freshman looking for direction. This put him on the path to a teaching degree and working in a special education class for a few years.

But the first person with autism Lee worked with was the next difference maker. "He was a little 13-year-old who was very unique in his behavior and it fascinated me," Lee shared. "This young man drove me to learn more about autism and ways we could focus on making their behavior work for them in life."

Ultimately, this would lead Lee to the field of applied behavior analysis, which would eventually include his current role at the Child Study Center's Autism Services department.

A little more than two years ago, Lee and his wife were well-established in San Antonio and he was eight years into a stint as a professor of special education at the University of Texas – San Antonio. Then, an opportunity too good to bypass presented itself to his wife as the associate director for student access and accommodation at TCU.

Having grown up in North Texas, Lee was familiar with the storied and stellar reputation of the Child Study Center in helping children and in the realm of research. It was a natural fit.

As an applied behavior analyst and with decades professionally immersed in this field, Lee understands the anxiety that parents can have with an autism spectrum disorder (ASD) diagnosis because he's seen it many times.

"I caution anyone that gets an ASD diagnosis to avoid the Internet and definitely don't google 'autism,'" Lee Mason explained. "There's so much misleading information and it's truly best for them to discuss with their doctor about the next steps and whether a specialist should be involved."

When those conversations with a family doctor brings families to Lee or other applied behavior analysts at the Child Study Center, that's the time that Lee gets to try to then be the difference maker for someone else.

"The seven or so patients I get to work with for about 30 hours a week for several months are with us to so we can shape new behavior," Lee said. "How does this current behavior work for the child and how can we get them to be able to function more appropriately in a less intensive setting, like we have at Jane Justin School. We want to get these kiddos to adapt and settle back into a more traditional preschool or elementary school setting."

The length of time these children are with Lee is longer than the average school year because a lack of communication skills in many cases. With language being so vital for all of us, the breakthroughs in communication for his patients is particularly rewarding for Lee.

"Language influences how we see and experience the world around us," Lee shared. "So, when I have a child go from being non-verbal to verbal (even just echoing sounds) to having a speaking repertoire, that's easily one of the most profound parts of my career."

It's unlikely that Lee is alone in that sense of satisfaction and impact because he's part of a team of like-minded professionals, who he holds in the highest of regard.

"At the Child Study Center and the Jane Justin School, I know that we make a significant impact on kids," Lee added. "But, selfishly, I know that I'm surrounded by strong colleagues, who improve my own professional development and, simply, elevate me and make me better for our kids."

With everyone, like Lee and his peers, working to make life better for all children, regardless of a diagnosis, issue or circumstance, we can all proudly proclaim #WeAreCookChildrens.