Appointments, Testing and Screenings | Vaccine and Kids | Symptoms and Exposures 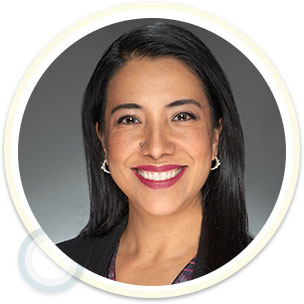 "This was my first job in my field, and I never worked anywhere else," she said, "so in a way, Cook Children's raised me to be the leader I am today."

Veronica started college early at 16 and worked straight through to earn a master's degree in health care administration. In 1998, she took a job with Cook Children's as the office supervisor of Central Neighborhood Clinic. It was the beginning of a 22-year-long career here.

She's the first to admit she had the formal education but not the experience when she arrived at Cook Children's. Veronica credits the woman who first hired her, Robin Shaver, the then-director of neighborhood clinics, for helping her grow.

"She always seemed absolutely sure no challenge was too big to overcome," Veronica said. "She truly cared for the families we served from some of the poorest neighborhoods of the metroplex. I watched how she interacted with physicians, staff, administration, parents and patients. She had the ability to make everyone feel heard and important."

Robin also was candid, "but her constructive criticism came from a positive place with good intentions," Veronica said. Veronica had been given opportunities to grow by giving her the chance to learn from mistakes, she said.

She became the director of Cook Children's neighborhood clinics in 2012, and in 2016, Veronica was named AVP of CCPN.

The biggest initial challenge she faced at Cook Children's was being younger and less experienced than most in her peer group, Veronica said.

"So, people around me seldom sought my input, and it took some time to gain credibility among my peers, let alone to be noticed by anyone in leadership," she said. "It also didn't help I was a smarty pants and too naïve to realize experience can trump theory. Who knew that the real learning happens outside of the classroom and can come from the oddest opportunities?"

For Veronica, such an opportunity arrived in the form of a non-verbal quadriplegic 7-year-old and his mother, who spoke limited English. She was humbled by the family's challenges to find adequate care, equipment and supplies for the boy. By helping them find resources, she gained a broader understanding of practice management.

"This family taught me about resilience, empathy, joy, hope and what hard work really meant," Veronica said, adding she also learned other valuable lessons. "Lessons No. 1 through 5 — Be nice to your staff, empathize with other people's perspectives, and figure out creative ways to get it all done because patients come first, and it takes a team!"

All these experiences eventually built her skills, confidence and credibility, Veronica said, and she "earned my peer's respect, caught the attention of leadership and grew to be considered a subject matter expert on practice operations."

The 10-year-old Veronica would have been impressed to know she'd someday reach that level. Born in Mexico, Veronica moved to Fort Worth when she was 2, and obtained U.S. residency through the 1986 Amnesty Act under President Ronald Reagan.

When she was 10, Veronica wanted to be a physician but figured her family couldn't afford to send her to medical school, so she asked her teacher what else she could do in health care. The teacher told her she could be a health care administrator.

"I think the only reason she didn't say nurse or something clinical was because she had a career day speaker already lined up for that week — and he happened to be a JPS administrator," she said.

From that age on, she set her sights on health care administration. Veronica credits her mom, her most influential mentor, for keeping her on that career path. She described her as one of the smartest, hard-working people she knows "who learned to write and read as an adult here in the U.S. because she said no American (however you became one) should squander the opportunity of an education."

"She cleaned houses for a living, learned English at night school at Trimble Tech High School, studied for her citizenship test like it was her Boards, and all the while cooked homemade meals every single day," Veronica said. "She has always been confident I will achieve my goals … leaving no room for pity parties or quitting, even when it got hard.

"She says you can change your mind because smart people know when something isn't working. But you don't give up. And you always finish what you start."