Preparing for a visit

Our program offers testing, diagnosis and treatment for the many types of sickle cell disease. Research is also an important part of our program as we seek new ways to treat and prevent the many complications that can occur as a result of this disease.

Sickle cell disease affects about 70,000-80,000 people nationwide. People with this disorder have atypical hemoglobin molecules including hemoglobin S, which can distort red blood cells into a sickle shape, thus the name "sickle cell disease." Normal blood cells are smooth, round, flexible and shaped like the letter O so they flow easily through the veins. However, if your child has sickle cell disease, his blood cells can become stiff, sticky and shaped like the letter C, causing a variety of problems. The sickle cells can block veins, causing damage to organs, and can also cause mild to severe and sometimes excruciating pain for the patient. Sickle cells also have a shorter lifecycle, which results in anemia because the body cannot regenerate new cells fast enough.

Depending on the type of sickle cell disease, your child may not have any symptoms or the symptoms could range from mild to severe. Some of the most common are:

Stroke is a major complication of SCD. Children with SCD are much more likely to have a stroke than are children in general. Children with severe types of sickle cell disease receive routine monitoring with a test called a Transcranial Doppler (TCD) to determine which children are at highest risk for stroke. A program of regular red blood cell transfusions has been shown to reduce stroke risk in people with SCD who are found to be at highest risk. Learn more about the Cook Children's stroke center here.

Cook Children's Hematology and Oncology Center is actively involved in sickle cell disease research, including stem cell transplantation. Our recognized team of researchers works with leading organizations across the U.S. and around the globe to find solutions to treating, preventing and curing the disease. As a research facility, we also have a number of clinical trials available and we are able to match our patients to trials at other facilities. To learn more about the ongoing research at Cook Children's, click here. 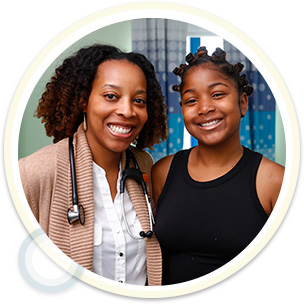 Dr. Clarissa Johnson, director of the Sickle Cell Program at Cook Childrens, talks about advanced treatments and therapies as well as promising new clinical research on the horizon for sickle cell disease. Her extensive knowledge and passion for treating patients with sickle cell disease is the driving force behind bringing relief to hundreds of patients at Cook Children’s.