Anytime time a child gets a bump, cut or bruise, it's a scary moment for parents. Most of the time a bandage or a kiss – or both – will mend things. But for a parent whose child has a bleeding disorder, it's a slightly different story.

These children do not bleed more, but they bleed longer than usual. Fortunately, the hematology and oncology program at Cook Children's has an entire team that specializes in caring for kids and teens with bleeding disorders.

Camp Ailihpomeh – Ailihpomeh is hemophilia backwards. But for boys with hemophilia, it means moving forward with fun, adventure and confidence. Learn more about this amazing summer camp here.

The Comprehensive Hemophilia Treatment Center (HTC) at Cook Children's is part of a nationwide, federally funded network. We specialize in the diagnosis, evaluation and treatment of hemophilia, von Willebrand disease and other bleeding disorders. One of only five pediatric hemophilia treatment centers in Texas, our program is also affiliated with the Centers for Disease Control's Great Plain Region, which includes Texas, Oklahoma, Louisiana, Arkansas, Missouri, Kansas, Iowa and Nebraska. 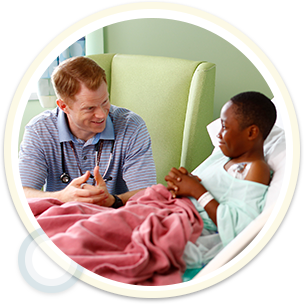 Advanced Research and Treatments for Hemophilia

Timothy McCavit, M.D., from Cook Children's Bleeding Disorder Program and Hemophilia Treatment Center, discusses our participation in revolutionary clinical research that holds great promise for children and young adults with hemophilia. This new clinical research is currently the best available and in patients on preliminary drug trials, the treatments have been transformative and their quality of life has greatly improved. Listen to learn more about new breakthrough treatments for hemophilia patients.

Hemophilia is a bleeding disorder in which the blood clots slower than normal or not at all. This results in longer than usual bleeding. So an injury that would normally bleed for a few minutes may bleed extended periods of time. There are two types of hemophilia: hemophilia A, and hemophilia B.

Hemophilia A is the most common diagnosis. Nearly 80 percent of cases are hemophilia A. Someone with hemophilia A deficiency lacks factor VIII. Factor VIII is a protein that helps blood to clot. Clotting is the body's process to prevent excessive bleeding. When factor VIII is missing, the body can't do its job.

Cook Children's HTC also treats other bleeding disorders, including but not limited to:

Hemophilia usually affects boys. One in every 5,000 baby boys are born with this inherited bleeding disorder. In the U.S. today, there are approximately 20,000 boys and men living with hemophilia. Hemophilia affects males from all racial, ethnic and socioeconomic groups. Rarely, a girl may be born with the disorder. Women are the carriers of hemophilia, meaning they do not have the disorder but can pass the affected gene on to their children.

Even though hemophilia is genetic, it does occur among families with no prior history. About one-third of newly diagnosed babies have no family history of hemophilia. These cases are thought to be due to a change to the gene's instructions for making the clotting factor protein, called a "mutation." This change or mutation can prevent the clotting protein from working properly or to be missing altogether.

The following symptoms can be warning signs of hemophilia or other bleeding disorders:

If your child has any of these symptoms, call your pediatrician or health provider.

Male infants who have a family history of hemophilia should be tested as soon after birth as possible. And your pediatrician may recommend that the baby be tested before birth, particularly if there is a risk for a more severe form of the disorder.

Diagnostics will include blood screening and clotting factor tests. These tests will determine the levels of circulating factor in the blood. They will also show the type of hemophilia your child has and the severity of the disorder.

Once your child's tests are complete and the diagnosis is made, your specialist will recommend a treatment plan that is unique to your child.

"Do the 5" Tips for Healthy Living

Get more tips, facts and helpful information from the CDC here

When you bring your child to the Hemophilia Treatment Center (HTC) at Cook Children's you'll get more than a specialist in hematology and oncology, you get an entire team who specializes in the care and treatment of kids and teens with hemophilia. And we stress the word care.

We are a Centers for Disease Control (CDC) recognized HTC. It is a distinction we have earned through our commitment to complete care. That means that we address all the issues you and your child face as a result of this disorder. Depending on your child's diagnosis your team may include:

The most common treatment for hemophilia is to replace the missing blood clotting factor, factor VIII or factor IX. Treatments can be in response to a bleeding incident or as a regular regimen to prevent bleeds from occurring. The type of treatment your child receives will depend upon the type of hemophilia diagnosed.

Treatment medications we currently use include (but not limited to):

Thanks to advancements in medicine, patients and family members can learn how to give their own clotting factor at home. This means that treatment can be delivered quickly when and where needed, helping to reduce serious bleeding and side effects.

Our research goals are focused treatments and therapies that can reduce and prevent complications from hemophilia and ultimately to find a cure for these bleeding disorders.

Because we are a CDC recognized hemophilia treatment center (HTC), we are privileged to participate in and lead research programs that improve the lives of our patients and patients around the world who live with this very rare and complex disorder. It also means that we participate in current clinical trials, offering many of our patients' access to treatments and therapies not available to the general market as yet.

These types of research change lives and are a source of hope to young and adult patients and their loved ones.