The phrase "mind-body connection" is a well-known one and in cognitive neuroscience the aim of the academic specialty is devoted to exactly that, the study of biological (neural) substrates underlying cognition, mental processes of acquiring knowledge and understanding through thought, experience, and the senses (Fig. 1). Prior to cognitive neuroscience being known as it is today, two separate fields provided insight into the study of the mind as an information processor (cognitive psychology) and the study of the nervous system (neuroscience or neurobiology).

Along with neuroscience, neurology, the medical discipline devoted to the treatment of nervous systems disorders, has provided us with what we know about how the nervous system connects to the rest of our body as well as much of what we know about our five senses, and more. What neurology does not provide is an ideal lens into our mind or mental health. Psychology, on the other hand, is the scientific study of the mind and behavior (sub-fields: human development, sports, health, clinical, social behavior and cognitive processes). Similar to neuroscience, psychology alone does not provide a comprehensive lens into the mind or its disorders, and their neural correlates. The scientific study of mental disorders, or the study of abnormal cognitions, behavior and experiences, is referred to as psychopathology, whereas the medical specialty devoted to the diagnosis, prevention, study, and treatment of mental disorders is referred to as psychiatry.

In recent years, the academic pursuits of psychiatry have brought about a resurgence in Neuropsychiatry. While neuropsychiatry is often considered a subspecialty of psychiatry, it was the original medical discipline that dealt with mental disorders attributable to diseases of the nervous system. It predated the separate fields of neurology and psychiatry, which wanted to look at the causes of disorders from an "inside-the-skin" neuropathological (neurology) and "outside-the-skin" environment (psychiatry) perspective separately (Kendler, 2005). Psychiatry's academic pursuits to establish biosignatures of mental health has fused the "outside-the-skin" and the "inside-the-skin" perspective together again. The field of cognitive neuroscience has aided in this endeavor. It blends the psychological (behavior) and neurobiological (brain function) disciplines into one allowing us to identify the neural correlates of the mind and its disorders. Through the years, brain function has been mapped more successfully, crossing the boarders of structural definitions of brain function originating through neurology. Neural networks are increasingly understood, but much more work is needed to understand the neural correlates of cognitive processes that underlie mental health and the symptoms that give rise to mental disorders.

Mood and anxiety disorders like major depressive disorder (MDD) and generalized anxiety disorder (GAD) are among the most common Axis 1 disorders in first world countries. MDD, in particular, is a leading cause of disability worldwide, with the World Health Organization stating suicide to be the leading cause of death among those 15-29 years of age.

MDD is a mental disorder characterized by a pervasive and persistent low mood that is accompanied by low self-esteem and by a loss of interest or pleasure in normally enjoyable activities. It is also defined as a brain disorder characterized by persistently depressed mood or anhedonia, causing significant impairment in daily life. However, this "brain disorder" is not fully defined - no brain markers or brain tests of depression exist. Recent work using magnetic resonance imaging aims to develop such brain markers. Current discoveries need validation and replication to become what we know as "biomarkers" to aid diagnostics and treatment monitoring (see Figure 2 for some visual depictions of two different imaging modalities used to investigate MDD).

Furthermore, MDD is not just on the rise in adults, it is on the rise in our youth. Research to develop tests that will aid in early identification and even build resilience is needed to promote a happy and healthy life.

Psychiatric Considerations in Neurological Disorders such as Epilepsy

It is estimated that between 0.5-1.0% of the general population has a seizure disorder (Benbadis & Hauser, 2000). Comorbid psychiatric and psychological disorders are common in patients with seizure disorders, with some nearing 50% rates of depression, and 30% rates of anxiety. Researchers at the 63rd Annual Meeting of the American Epilepsy Society reported that psychiatric disorders are associated with an increased risk for developing epilepsy and vice versa. A bidirectional relationship between epilepsy and psychiatric disorders suggests a possible shared underlying predisposition for the conditions. Despite the comorbid rates, there is little rigorous research investigating the similar and differentiating psychological and biological underpinnings.

There is a need for robust studies using multimodal psychological and biological methods to draw insight into seizure and psychiatric disorder profiles that will aid diagnosis and treatment to improve quality of life.

Imaging and Developing A Biosignature Model for Neurophenotyping

The precision medicine medical model provides an avenue to use biomarkers to characterize subgroups. Specifically, precision medicine proposes customized healthcare, with medical decisions, treatments, practices, or products being tailored to a subgroup of patients, instead of a one‐size‐fits‐all model. This model aims to increase benefit and decrease adverse outcomes (Fig. 3). Similar to this model, research using multimodal approaches can identify an index of measures to characterize subgroups and offer potential biomarkers for precision medicine for these subgroups. Characterizing subgroups will aid diagnostic information, as well as in selecting appropriate and optimal therapies based on the context of a patient's biosignatures. 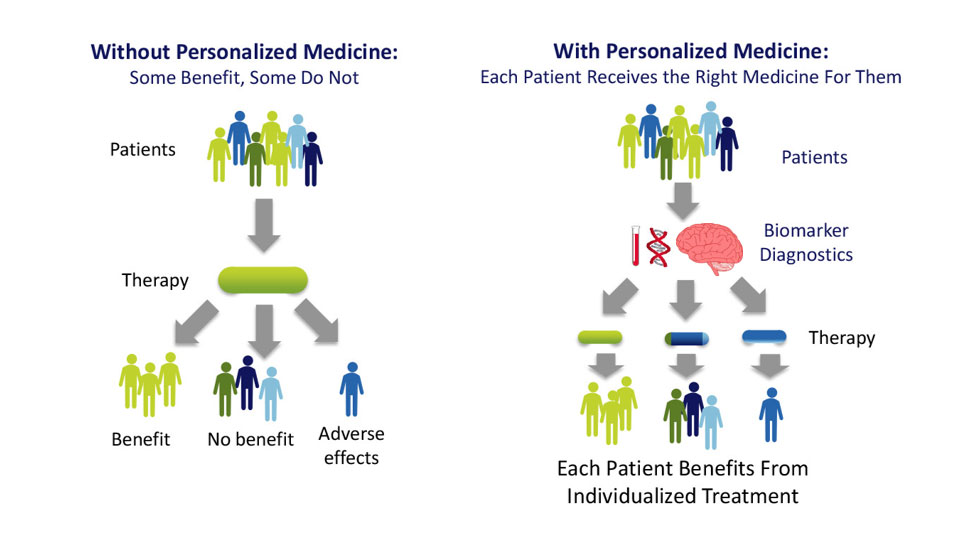 Our research in seizure and psychological comorbidities is needed to better characterize phenotypes and explore the role of common underlying risk factors, and elucidate shared etiologies. For conditions that include psychopathology (with and without a seizure disorder), the use of behavior and brain imaging techniques (cognitive neuroscience) will provide a more comprehensive examination to help us understand the disease, its treatment course, and ultimately aid resilience and prevention.

Foroughi, A. A., Nazeri, M., & Asadi-Pooya, A. A. (2020). Brain connectivity abnormalities in patients with functional (psychogenic nonepileptic) seizures: A systematic review. Seizure.