Epilepsy is a neurological disorder in which brain activity becomes abnormal, causing seizures or periods of unusual behavior, sensations, and sometimes loss of awareness. The brain's abnormal activity could be due to an inherited genetic condition, trauma diseases or developmental disorders of the brain. Epilepsy is one of the most common chronic neurologic conditions affecting 0.5-1% children. Antiseizure medications are the first choice of treatment for epilepsy, however, they have side effects and cannot control the seizures in approximately 30% of patients. For these patients, the most promising treatment is brain surgery. Epilepsy surgery has advanced significantly, and nowadays good results can be expected in approximately half of the patients. Epilepsy surgery should be performed early in life to allow the still growing and developing pediatric brain to recover normal brain functions after surgery.

Figure 1: Cortical zones in epilepsy overlapping each other. The goal of epilepsy surgery is the resection of the epileptogenic zone. However, its estimation is not straight forward and cannot be done in a direct way. The estimation of the epileptogenic zone is done indirectly through mapping several cortical areas which likely overlap each other, such as the ictal (or seizure) onset zone, the irritative zone, and the eloquent areas [i.e. primary motor area (in green), somatosensory area (in blue), language areas (in yellow), and visual area (in orange)]. These eloquent areas should not be resected during epilepsy surgery.

The goal of epilepsy surgery is the resection of the brain area which is essential for the generation of seizures. This area is called the epileptogenic zone (Fig. 1). Complete resection of this area may lead to medication and seizure freedom. Yet, this area is theoretical, meaning that there is no tool or method to directly identify it with precision. To define the epileptogenic zone, children who are good candidates for epilepsy surgery undergo an extensive presurgical evaluation which involves several tests that help to pinpoint other brain areas which are indirect estimates of the epileptogenic zone. For example, these tests can identify the brain area that generates abnormal electrical signals (i.e. epileptic spikes), called irritative onset zone, or the brain area where the seizures begin, the so-called ictal (or seizure) onset zone (Fig. 1). Magnetoencephalography (MEG) and high-density electroencephalography (HD-EEG) are two of these tests that are able to detect and localize spikes, which are epileptic activity generated by the irritative zone (Fig. 2). The irritative zone defined by these tests is a good approximate estimator of the epileptogenic zone (Fig. 3). These tests also help to precisely identify important areas in the brain which are responsible for the different normal functions, for example movements and speech. These areas are called eloquent areas (Fig. 1) and should not be resected during surgery in order to avoid functional deficits.

Figure 2: Epileptic spikes detected with HD-EEG and MEG. Portion of simultaneously recorded scalp HD-EEG and MEG signals with frequent spikes. The highlighted section is one second that contains one sharp wave shown on the right panels in an extended time scale display. Red dots indicate the peak of the spike. Figure adopted by Papadelis et al. (2016). 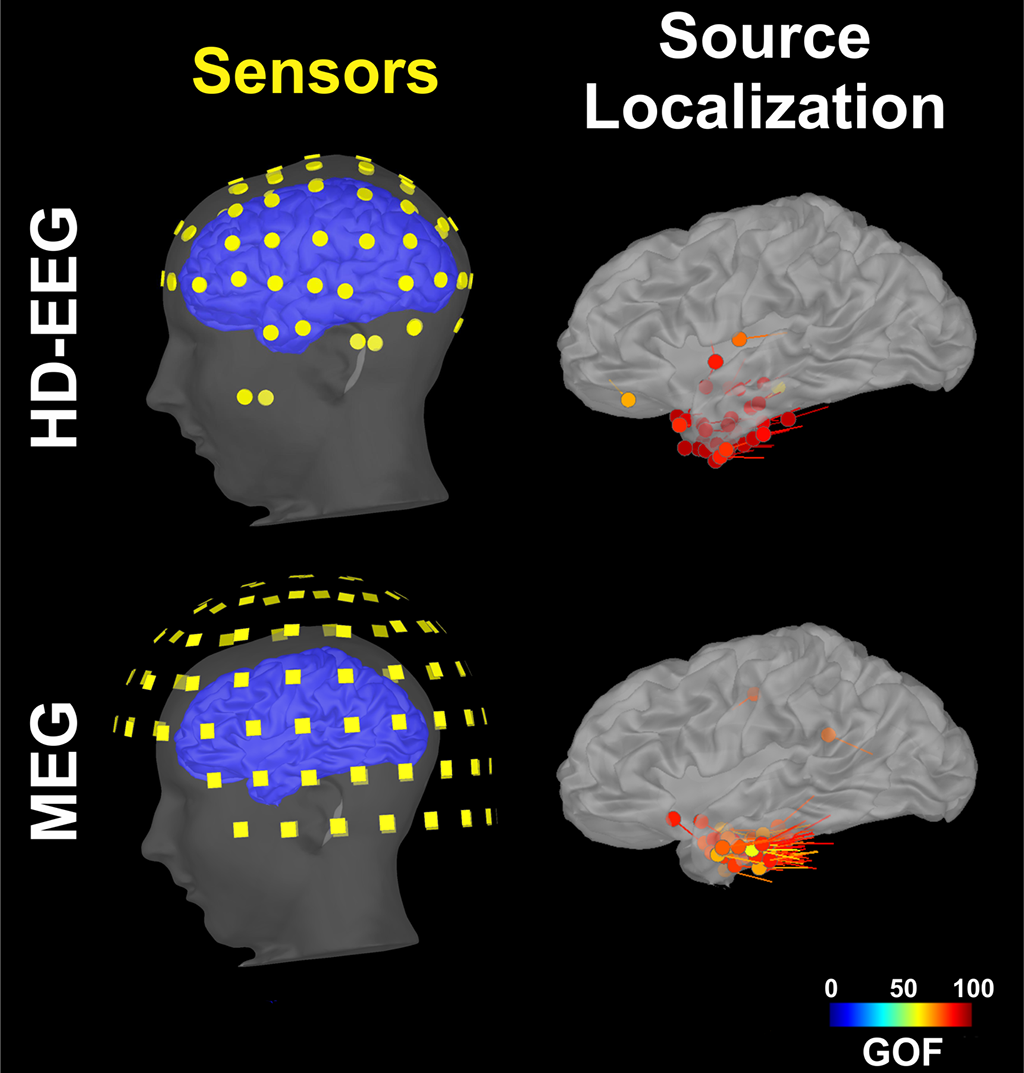 Figure 3: Localization of the irritative zone in a child with epilepsy using HD-EEG and MEG. The location of the HD-EEG and MEG sensors (in yellow) with respect to the child’s head anatomy (left panel). Source localization of spikes for the two techniques using dipoles (yellow, orange and red lollipops) overlaid on the child’s cortical surface (in grey). The formulated clusters of dipoles estimated with the HD-EEG and the MEG indicated that the irritative zone is located in the left temporal lobe. For more details see Tamilia et al. 2019.

Yet, the results of these tests are sometimes inconclusive or contradictory. Thus, new techniques and data analysis methods need to be developed in order to help reliably identify the epileptogenic zone. Funded by the National Institute of Neurological Disorders and Stroke, our research team led by Dr. Christos Papadelis (Principal Investigator) works closely with our epilepsy medical team at Cook Children’s Health Care System (Dr. Scott Perry and his team) and collaborators at Boston Children’s Hospital (Dr. Phillip Pearl and his team) and Massachusetts General Hospital (Dr. Steven Stufflebeam and his team) to develop such new biomarkers. The team focuses its efforts on signals which seem to be generated particularly by the epileptogenic zone. These signals are called high frequency oscillations (or HFOs) and are characterized by fast oscillatory activity in the frequency range between 80 and 500 Hz. HFOs can be recorded using invasive techniques such as stereotaxic electroencephalography (sEEG), but our group has shown strong evidence that HFOs can also be recorded non-invasively using scalp electroencephalography (EEG) or magnetoencephalography (MEG) (Fig. 4 - left) (see Papadelis et al., 2016; Tamilia et al., 2017; Tamilia et al., 2020). Figure 4 (right panel) shows an example of an HFO detected non-invasively with EEG and MEG. The development of such a non-invasive biomarker of epilepsy would augment the presurgical evaluation of children with refractory epilepsy by guiding the placement and implantation of intracranial EEG and facilitate the surgical planning for these patients.

Figure 4: HFOs detected non-invasively using simultaneous MEG and HD-EEG. During recordings, the child either sits comfortably in an armchair placing his/her head inside the MEG helmet while wearing the HD-EEG cap (left panel; see also MEG and HD-EEG sections) or laying down on a specially designed bed. HFOs in the frequency band between 80 and 250 Hz (ripples) can be recorded non-invasively using the MEG and HD-EEG. They look like fast oscillatory activity (right panel) and in the time-frequency plot appear as an isolated island which is separate from the low frequencies. For more details see Papadelis et al., 2016.

One challenge that our team faces is that HFOs are generated in large areas of the brain which often overlap with the eloquent brain areas that should not be resected during epilepsy surgery. On intracranial recordings, we have showed that the HFOs propagate across several areas of the brain and that the onset of this propagation is a promising specific biomarker to the epileptogenic zone (Fig. 5). Thus, there is no need to surgically resect all the area that generates the HFOs; surgical resection of the onset generator is sufficient in order for the child to, hopefully, become seizure free.

Figure 5: HFOs recorded invasively with intracranial EEG propagate across time. HFOs in the frequency band between 80 and 250 Hz (ripples) propagate across several electrodes placed on the child’s cortex during surgery. The onset of this propagation represents the epileptogenic zone that should be resected. For more details see Tamilia et al. (2018).