The Neuroscience Research Center works alongside our Level IV Neonatal Intensive Care Unit (NICU) to continue to improve neurologic outcomes for our smallest patients. As modern medicine has advanced to dramatically improve the survival rate of preterm infants, our focus is to improve their long-term neurologic outcomes. A large portion of neonates that require a stay in the NICU have suffered some sort of brain injury or go on to develop cognitive or behavioral disabilities. Diagnosing these injuries or identifying risk factors for developing future deficits early while still in the NICU allows habilitation or other interventions to begin while the brain has the greatest neuroplasticity. Many injuries, such as intraventricular hemorrhage (IVH) or periventricular leukolamacia (PVL), can be diagnosed with MRI or cranial ultrasound, however, many more subtle injuries are missed or undetectable (Fig. 1). Due to the fragility of these neonates, it is often difficult or impossible for them to leave the NICU to get diagnostic testing done such as an MRI, CT, or MEG, therefore, there is a great need to identify injuries or deficits in the patients at the bedside.

Nutritive sucking (feeding; NS) in an infant has long been viewed as the first 'window' to assess the neurological status of the neonate. Currently, the only way the sucking activity of infants is assessed is qualitatively though the insertion of a gloved finger into the infants mouth. There is no quantitative measure currently being used clinically in the NICU. Recently, the FDA approved a device called the nfant® Feeding Solution that measures the compression component of the suck in infants. It has been demonstrated that high smoothness in the nutritive sucking pattern, which is indicative of good sucking skills, is associated with high-fractional anisotropy measured by an MRI with DTI, which is indicative of intact neural tracts (normal brain, no injury). High irregularity in nutritive sucking, which is indicative of poor sucking skills, is associated with high-mean diffusivity measure by an MRI with DTI, which is indicative of low integrity of neural tracts (suggests a brain injury) (Fig. 2). 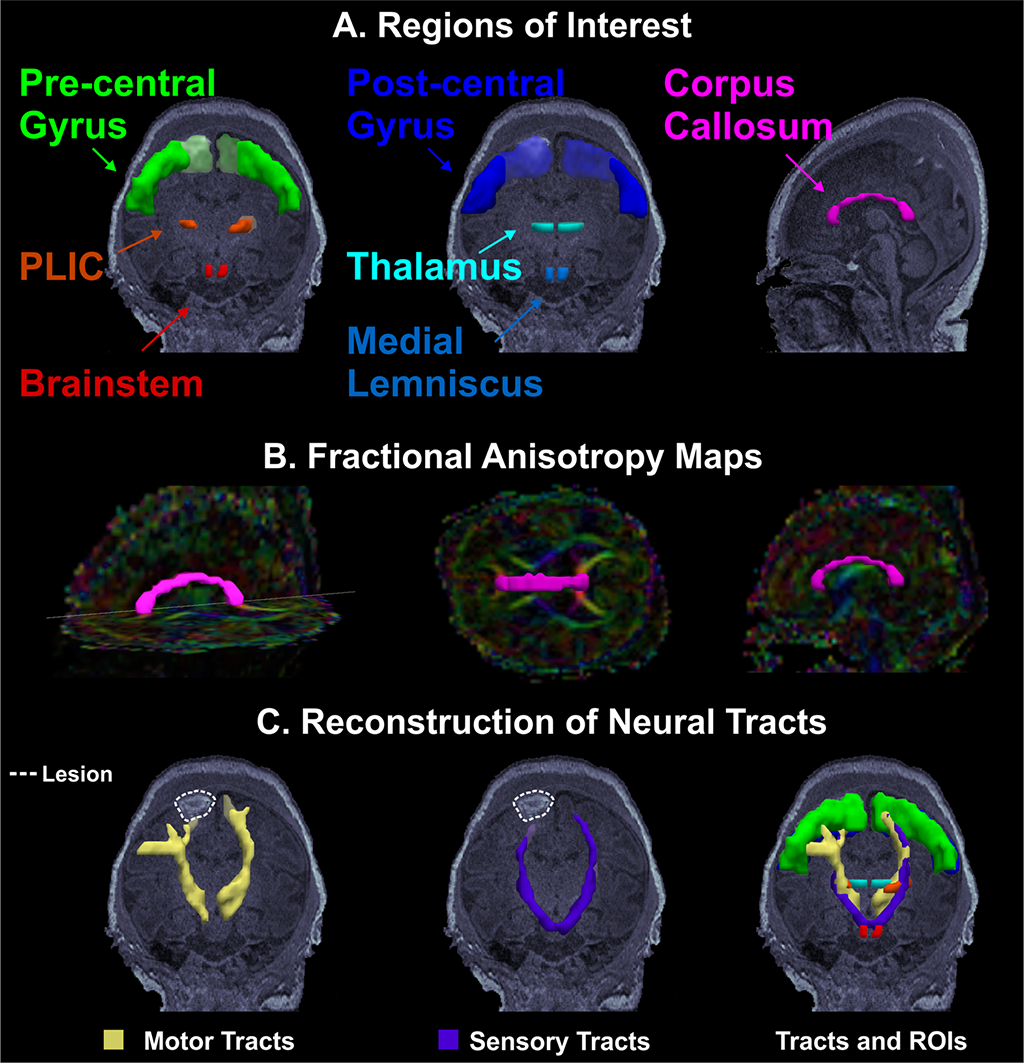 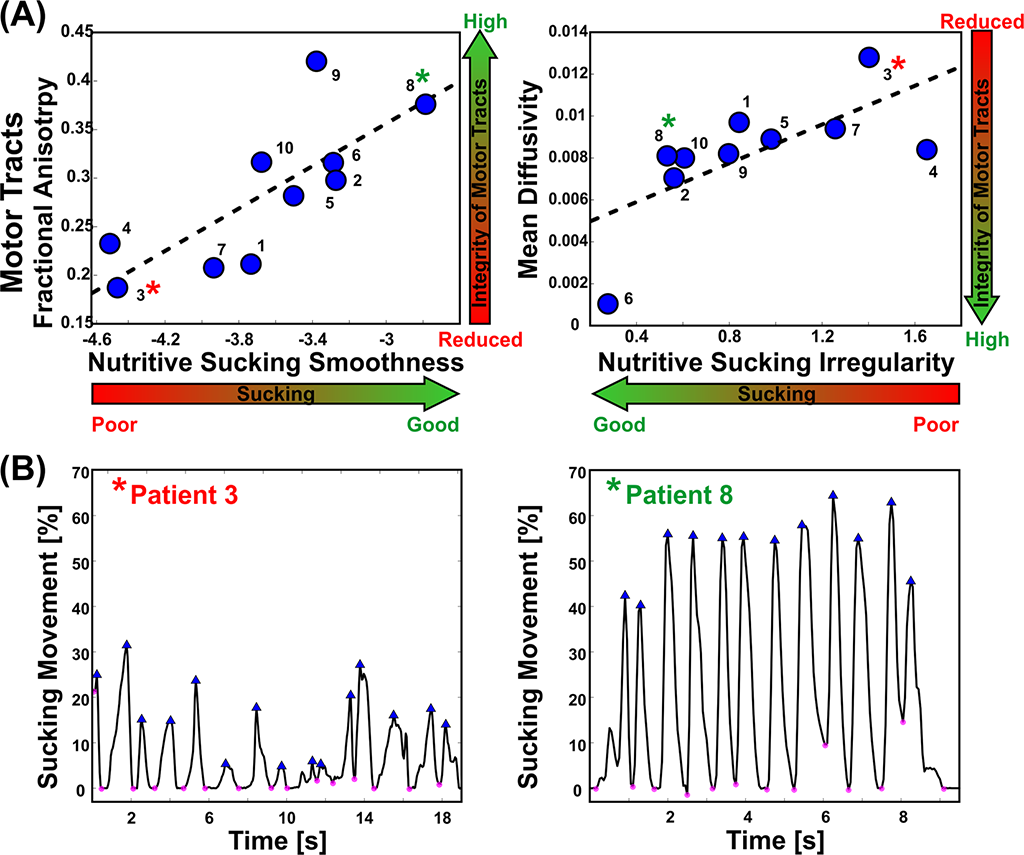 Figure 2: Correlation of NS abnormal patterns with integrity of sensorimotor fibers in infants with established brain injury. A. Anatomically defined regions of interest overlaid on the T1 MRI of a female 4 day old preterm infant. On the left, regions of interest for the motor tracts; in the middle, regions of interest for the sensory tracts; on the right, regions of interest corresponding to the corpus callosum. B. Corpus callosum (magenta) overlaid on the fractional anisotropy color-maps. C. Motor (in yellow) and sensory (in purple) tracts reconstructed via probabilistic diffusion imaging tractography. Neural tracts overlaid on the patient’s MRI that shows ischemic injury lesion in the right frontal lobe. D. High smoothness in the nutritive sucking pattern, which indicates good sucking skills, is associated with high-fractional anisotropy, which indicates intact neural tracts. High irregularity in nutritive sucking, which indicates poor sucking skills, is associated with high-mean diffusivity, which indicates low integrity of neural tracts. E. Two bursts of nutritive sucking from patients. The left waveform demonstrates a poor NS behavior characterized by low smoothness and high irregularity (i.e., presence of multiple sized peaks); while the right waveform demonstrates a good NS behavior characterized by a smooth and regular nutritive sucking pattern.

In addition to HIE and preterm, there are many neonates with varying diagnoses in the NICU that would benefit from identifying brain injury early on. Our most fragile, those on extracorporeal membrane oxygenation (ECMO, or a "heart-lung machine”) cannot leave the NICU for any reason. Even after being taken off ECMO, their fragility limits any tools being used to treat or diagnose them. Our neonates with congenital heart disease, some that require open-heart surgery, are another population in our NICU that would benefit from a bedside measure that correlates with neurodevelopment. The use of the nfant feeding solution® device in our NICU allows for noninvasive, early identification of potential neurodevelopmental abnormalities that can help our neonates have better outcomes as they age.