Dystonia is a neurological disorder characterized by involuntary sustained muscle contractions that cause repetitive and/or twisting movements and abnormal postures. It can occur at any age and affect different parts of the body ranging from one specific part, two or more adjacent or unrelated parts (e.g. arm and leg on the same side), to most or all of the body. The diagnosis of dystonia is primarily based on expert observation of the physical symptoms. Possible causes of dystonia may include injury to the brain and genetic factors. Dystonia can be divided into three types according to etiology: idiopathic, acquired, and genetic. Cerebral palsy, the most common pediatric motor disability, may be the most common cause of acquired dystonia in childhood.

Dystonia in childhood is especially difficult to assess and treat in children of various ages. Pharmacological treatments are available to ease the symptoms of dystonia in children, but, since dystonia often occurs in the context of other abnormalities of muscle tone and movement, pharmacological management of symptoms often has limited effectiveness and unwanted side effects. For children with medication refractory dystonia, deep brain stimulation (DBS) is an option that can lead to effective management of symptoms and improvements in motor function. If the symptoms are believed to be caused by disturbances of the cerebellothalamocortical basal ganglia circuits, DBS of the internal pallidum (GPi), subthalamus nucleus (STN), and ventral intermediate nucleus of the thalamus (VIM) are used in pediatric dystonia patients. Long-term efficacy of GPi-DBS for various types of dystonia has been confirmed. Although effective in some patients, responses and outcomes from DBS can be slow, variable and difficult to predict.

Although DBS has been used in treating medication refractory dystonia for several years, it is still not clear how the brain of children with dystonia is changed by DBS. Our research uses a multi-modal brain imaging to assess functional changes induced by DBS treatment. Objective quantification of DBS-induced functional outcome in the brain will be critical in the understanding and improvement of the current DBS intervention.

Cerebral palsy is the most common physical disability in early childhood, occurring in 3-4 per 1,000 live births in the USA. It causes motor impairments often accompanied by disturbances of sensation and has substantial effects on function and health-related quality of life for children and their families. Symptoms in children with cerebral palsy vary greatly between individuals and can appear on one side of the body or the whole body. Movement and coordination problems often appear as spastic paralysis, involuntary movement, mirror movement, abnormal reflexes, impaired muscle coordination, abnormal posture, unsteady walking, rigidity in the trunk and limbs, etc. Sensation disturbances often show as diminished tactile discrimination and joint-position sense, abnormal pain sensations, and hearing and vision problems.

Early brain injury can impair the development of corticospinal tract (CST) and ascending sensory tract (AST). CST is the principle pathway for controlling voluntary movements (i.e. reaching, grasping) and AST is the pathway that sends peripheral sensory information to the somatosensory cortex (i.e. tactile sensation). Normal development will prune ipsilateral neurons and keep contralateral neurons, making the motor cortex and CST dominate the control of the contralateral hand. Preterm brain injury can lead to disruption of contralateral CST and the preservation of ipsilateral CST, resulting in ipsilesional reorganization of CST. Conversely, reorganization of the AST is not so adaptable and only exists in the contralesional side. Preterm lesions do not disrupt AST but large injuries that occur at full term can disrupt AST and even primary somatosensory cortex. Despite this capability, their reorganization may not be optimal and thus result in difficulties in motor function and control as well as sensory disturbances. 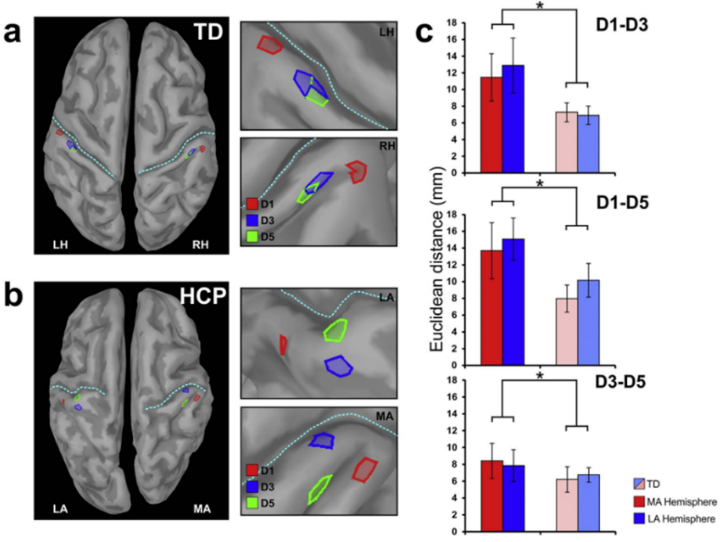 Figure 1: Somatotopic representations of thumb (D1, red), middle finger (D3, blue), and pinky (D5, green) as revealed by localization of the first peak cortical response evoked by corresponding digital pneumatic stimulation in a typically developing child (TD) and a child with hemiplegia (HCP). The child with hemiplegia has more scattered localization of the three fingers than the typically developing child. Figure adopted by Papadelis et al. (2018).

Objective quantification of brain functional and structural abnormalities and reorganization can be of significance in the diagnosis and treatment for children with cerebral palsy. Currently the diagnosis of cerebral palsy is mainly based on neurologist evaluation of symptoms, and a primary intervention for cerebral palsy is physical therapy. Findings on brain functional and structural abnormalities have the potential for contributing to novel neuromodulation interventions, informing target selection and protocol design to help children with cerebral palsy have better treatment outcomes.