The functional near infrared spectroscopy (fNIRS) technique detects blood oxygenation changes as a surrogate indicator of brain activity. During neuronal activation, more blood is recruited in the activated regions to supply the cells’ increased metabolic demand for oxygen, a phenomenon first reported as neurovascular coupling in the late 1800’s.

Operationally, fNIRS leverages the lower absorption of near-infrared light (NIR, the 700 – 900 nm spectral interval) by biological tissues and blood to penetrate through the scalp and skull and reach the cerebral cortex. In other words, skin, tissue, and bone are mostly transparent to NIR light, but not hemoglobin (protein molecules in red blood cells that carry oxygen), which are strong absorbers of NIR light. In contrast to functional MRI (fMRI), which is only sensitive to the deoxygenated hemoglobin, fNIRS uses two-wavelength differential spectroscopy to measure concentration changes in both oxygenated (HbO) and deoxygenated hemoglobin (HbR), and total hemoglobin (HbT) in the cerebral cortex.

Figure 1 Left: Example of FNIRs set up with cap and system. Right: Visual renderings of emitters and detectors on the scalp that send and receive light, which is determined by levels of oxygenated and deoxygenated hemoglobin to measure brain activity in a given area.

In a typical fNIRS system the two wavelengths (one below and one above the 800 nm isosbestic point at which the absorption coefficient of HbO equals that of HbR) are emitted through the skull into the gray matter. Scattering is high (~0.14-0.19 cm-1), but a distance-dependent fraction of the light from a source could reach a detector through a stochastic trajectory (Fig. 1). If the source and detector pair is approximately 3 cm apart on the subject’s head, then signals may be measured to a depth of about 1.5-1.8 cm. Anatomically, this places the measurement voxel on (or several mm below) the surface of the cortex. 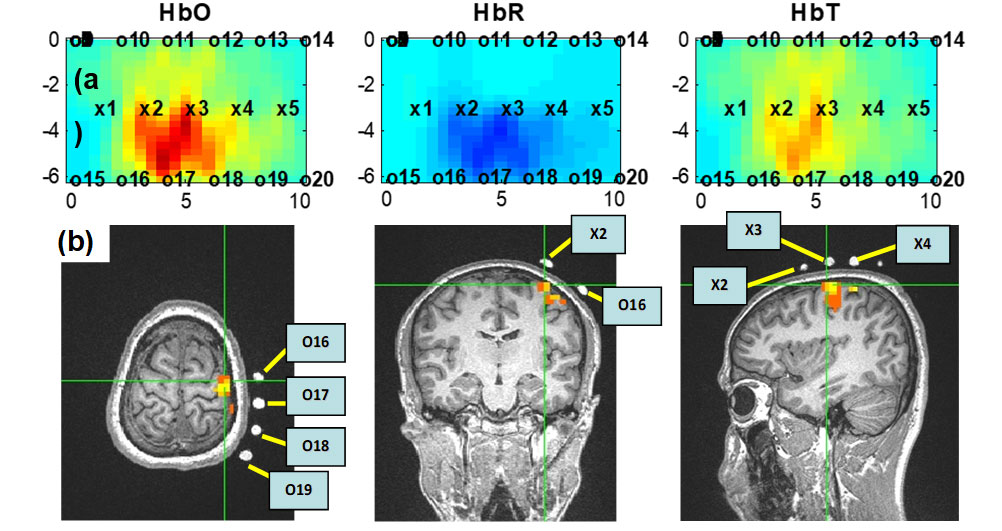 FNIRS is portable, robust to motion artifacts and offers the possibility of concurrent use with fMRI, positron emission tomography (PET), electroencephalography (EEG) and magnetoencephalography (MEG). Furthermore, fNIRS does not interfere electrically with neuronal stimulation techniques such as transcranial magnetic stimulation (TMS) and transcranial direct/alternating current stimulation (tDCS / tACS) among other possibilities. Figure 3 shows a popular commercial fNIRS system, the Techen CW-6 that is available to the researchers. Typically, these systems have a few dozen lasers and detectors and a spatial resolution of ~1.4 cm. Due to light penetration limitations, measurements only pertain to cortical function.

Since the introduction of fNIRS in the late 1970’s, the technique has been used to assess traumatic brain injury (TBI) caused by accidents, athletics, or combat, pre-surgical guidance of brain activity centers (e.g. speech, motor), occupational therapy validation and reinforcement (e.g. stroke, pediatric cerebral palsy, speech impediments) and neuro-pharmacological dosimetry and efficacy (e.g. depression, ADHD). In addition, the capacity to detect complex spatiotemporal activation patterns from closely neighboring but distinct functional regions makes this technology suitable for brain-computer interface (BCI) applications such as overcoming a disability in speech or language or controlling an upper extremity prosthesis. Also, the technique has been of particular interest in infant studies.