Electroencephalography (EEG) is an electrophysiological technique that records the electrical fields generated by the human brain. It is noninvasive and uses electrodes placed on the child’s scalp (like antennas to pick up brain waves). The electrical fields are recorded through sensitive amplifiers that measure regional differences in the electrical potential (voltage) which correspond to differential activity in the closest brain areas. Typically, these fields are recorded by a discrete set of electrodes , no more than 20. Yet, if an accurate topographical map is to be obtained, the measurement sites must be numerous (up to 256) and in close proximity. This requirement is similar to that for the number of pixels in an image displayed on a screen. If there are too few pixels, the image is blurry and distorted.

Recent studies have shown that at least 64 equally spaced electrodes are needed to cover the scalp in an adult and at least 128 in an infant to produce accurate plots of the electrical potential of the brain from the scalp. Such a configuration is called high-density EEG (HD-EEG) that is similar to EEG monitoring but uses caps with a larger number of scalp electrodes (128 or 256 electrodes). The research center recently acquired the latest technology in HD-EEG, the Geodesic Sensor Net EEG system that accommodates 256 channels that measures cerebral electrical activity (Fig. 1, left). This technology offers an excellent temporal resolution in the range of sub-milliseconds and a very good localization accuracy of a few millimeters. In some occasions, high-density EEG recordings are performed simultaneously with the MEG for even higher precision (Fig. 1, right).

Figure 1: HD-EEG recordings. Left: During HD-EEG, a specially designed net cap is placed on the child’s head. The net accommodates a high number of EEG electrodes (64, 128, or 256). No conductive gel is required for these recordings. A sponge attached to each of these electrodes is soaked in a conductive salt solution and placed on the child’s head. Right: Simultaneous recordings of HD-EEG and MEG.

HD-EEG is usually combined with a magnetic resonance imaging (MRI) to get what is called electric source imaging (ESI), which offers precise localization (spatial location) of brain activity (as dipoles) millisecond by millisecond. ESI is often used in clinical practice for the precise localization of epileptogenic tissue in patients with epilepsy who are unable to control their seizures with seizure medications (Fig. 2). Derivatives of the HD-EEG technique include evoked potentials, which involves averaging the EEG activity time-locked to the presentation of a stimulus of some sort (visual, somatosensory, or auditory) or a child’s response (motor). Event-related potentials (ERPs) refer to averaged EEG responses that are time-locked to more complex processing of stimuli. This technique is used for the localization of eloquent areas in the human brain during presurgical mapping as well as to help us better understand the function of the human brain and to monitor functional brain plasticity in response to rehabilitation.

Figure 2: Electric source imaging in presurgical evaluation of children with epilepsy. Source localization findings with ESI (256 channels HD-EEG) from a 12-year-old girl with medically refractory epilepsy. Localization is performed using equivalent current dipoles. A tight cluster of dipoles was found in the right frontal areas near the previous surgical resection that was partially beneficial to the child. These findings indicate a secondary spot of epileptogenic activity that should be resected in order for the child to be seizure free.

EEG signals reflect neuronal activity at a macroscopic level; they represent the collective electrical activity generated by large groups of neurons (105 or more). Due to the need of summation of the activity of a large population of neurons, the main source of EEG potentials are cortical neurons, which are arranged in layers in roughly the same orientation beneath the cortical surface. They are aligned with their long axis perpendicular to the cortical surface and are activated by synapses located on their soma and dendrites. The postsynaptic currents produced in the cortical neurons are the major contributors to the EEG signal. However, other types of neuronal and glial activity may contribute to the signal as well (Fig. 3).

A number of factors determine whether the extracellular voltage field produced by a region of cortex can be recorded from scalp EEG electrodes. These factors are both physical and functional. Physical factors include source location, orientation, and area. Functional factors include potential amplitude, frequency, and synchrony. A transient potential, such as an epileptic spike, serves as a good example for appreciating these relationships between source character and EEG fields. 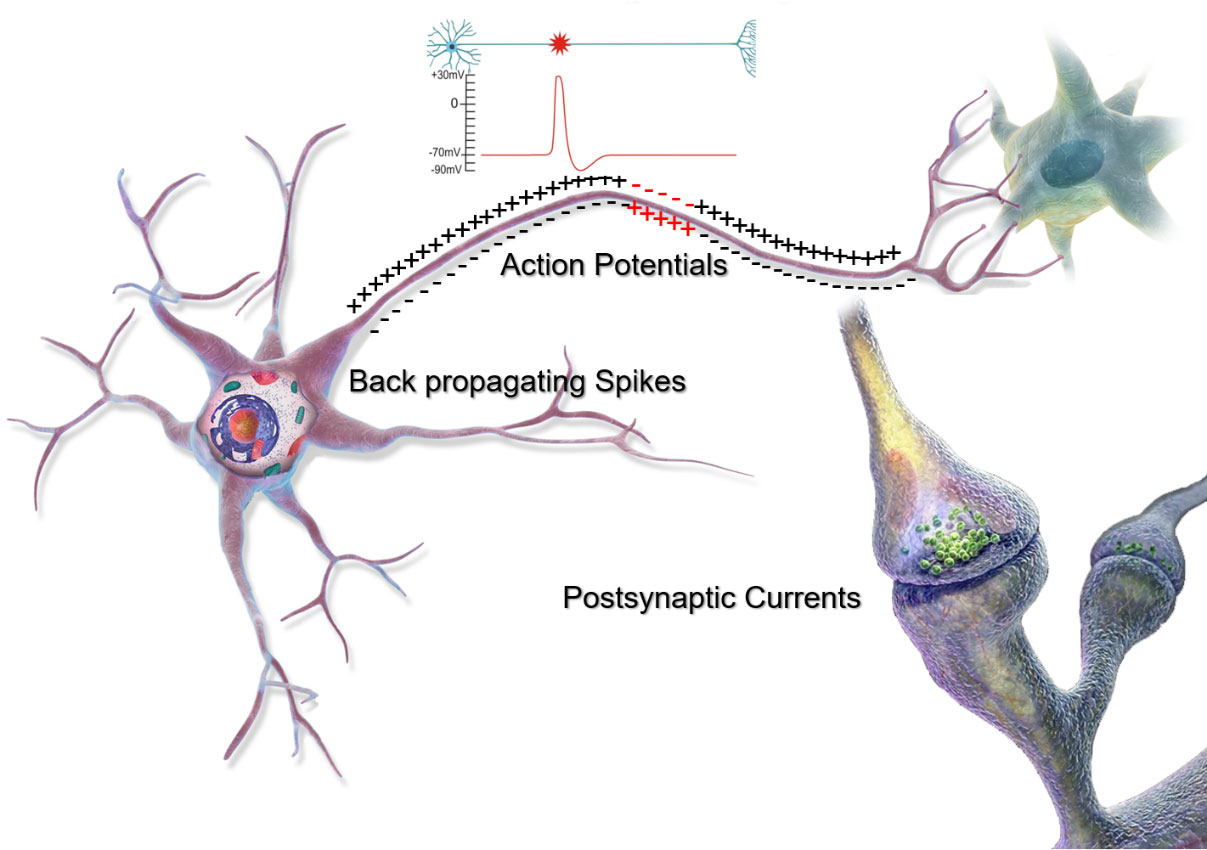 Figure 3: Neuronal events which are likely candidates to generate a measurable electric potential. Three separate basic neuronal events are likely candidates to generate a measurable electrical potential that can be measured with EED: (1) action potentials traveling along the axon away from the soma, (2) postsynaptic currents at the apical dendrites of neurons, and (3) backpropagating spikes into the dendrites. The postsynaptic potentials produced in the cortical neurons are the major contributors to the EEG signal.

The field of EEG had its origin with the discovery of recordable electrical potentials from activated nerves and muscles of animals and in the last quarter of the 19th century from the cerebral cortex of animals. Hans Berger (1873-1941) (Fig. 4), a German neuropsychiatrist, interested in cerebral metabolism, worked in relative isolation at the University of Jena. At the age of 18, on maneuvers with the German army, Berger had a near fatal accident and, at the same time, hundreds of miles away, his sister told their father that Hans was in grave danger and the father sent him a telegram. Since then Berger became a firm believer of telepathy which provided his great motivation to record the human brain. In 1924, Berger began to record electrical activity in human subjects with skull defects and obtained positive but inconsistent results. In 1926, he procured a more sensitive Siemens double-coil galvanometer with higher sensitivity, which allowed the use of low impedance surface electrodes. Berger (1929) experimented with many different surface and epidural needle electrodes in skull defect patients. His results in patients and subjects without skull defects consistently improved, especially in bald males. He published the first report of the human EEG in 1929 and described the term “alpha waves” and “beta waves” and the abolishment of alpha with the eyes open. Since then, the EEG field is continuously growing, and EEG became a standard tool in clinical neurological examination of several disorders, such as epilepsy. In 1947, The American EEG Society was founded, and the first International EEG congress was held. In the 1950s, William Grey Walter developed an adjunct to EEG called EEG topography, which allowed for the mapping of electrical activity across the surface of the brain. More details about the early history of EEG can be found in Stone & Hughes, J Clin Neurophys, 2013. 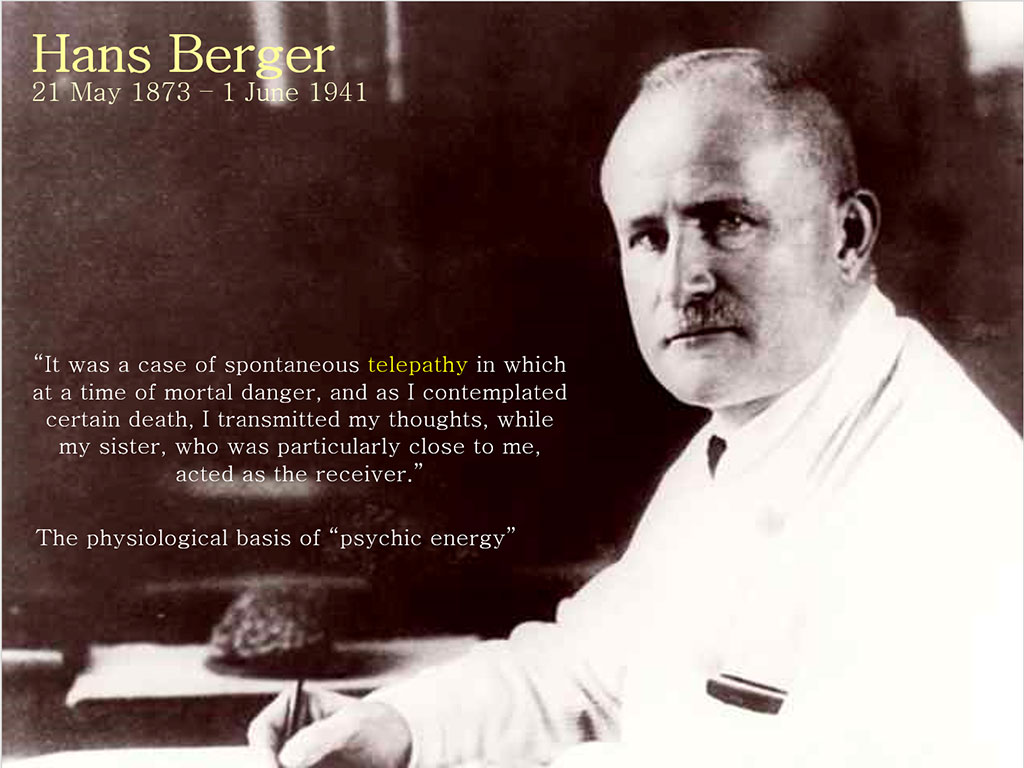 Figure 4: Hans Berger (1873-1941), a German neuropsychiatrist who recorded the first EEG signal. Since a near fatal accident during his military training, Hans Berger, became a firm believer of telepathy providing his great motivation to record activity of the human brain.

Electrodes are able to measure electrical activity in superficial parts of the cortex, with a depth around 5 mm, and a surface diameter of around 1-2 cm. EEG measures the synchronized activity of thousands of neurons in a focal area of the human brain. These electric activity generates an electric field that can be measured by an electrode with a conductive medium placed directly on the skin (Fig. 5). The coupling between skin and electrode can be described as a layered conductive and capacitive structure. The electrode is connected to an amplifier, an electronic device that can increase the power of the recorded signal. An amplifier functions by using electric power from a power source in order to increase the amplitude of the voltage or current signal. The amplifier gain is the ratio of the output signal to the input signal. The amplified signal is then converted from analog to digital through an AD converter and filtered in a specific frequency band (usually between 1-100 Hz) to enhance the dominant frequencies in the EEG signal. 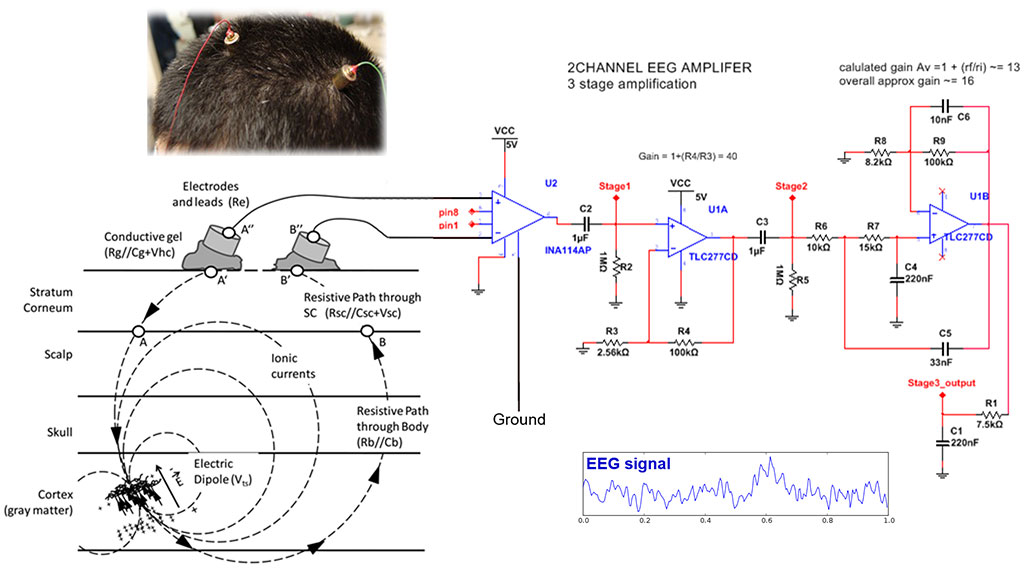 A variety of systems have been used in the past to place electrodes on the scalp for EEG recordings. The International Federation of Clinical Neurophysiology (IFCN) recommended a specific system of electrode placement that is known as the International 10-20 system. Specific measurements are made based on bony landmarks (i.e. nasion, inion, and preauricular points) to determine the placement of electrodes. From these landmarks, specific measurements are made and then 10% and 20% of a specified distance is used as the interelectrode interval (Fig. 6). This enables consistent replication over time between different clinics and laboratories. 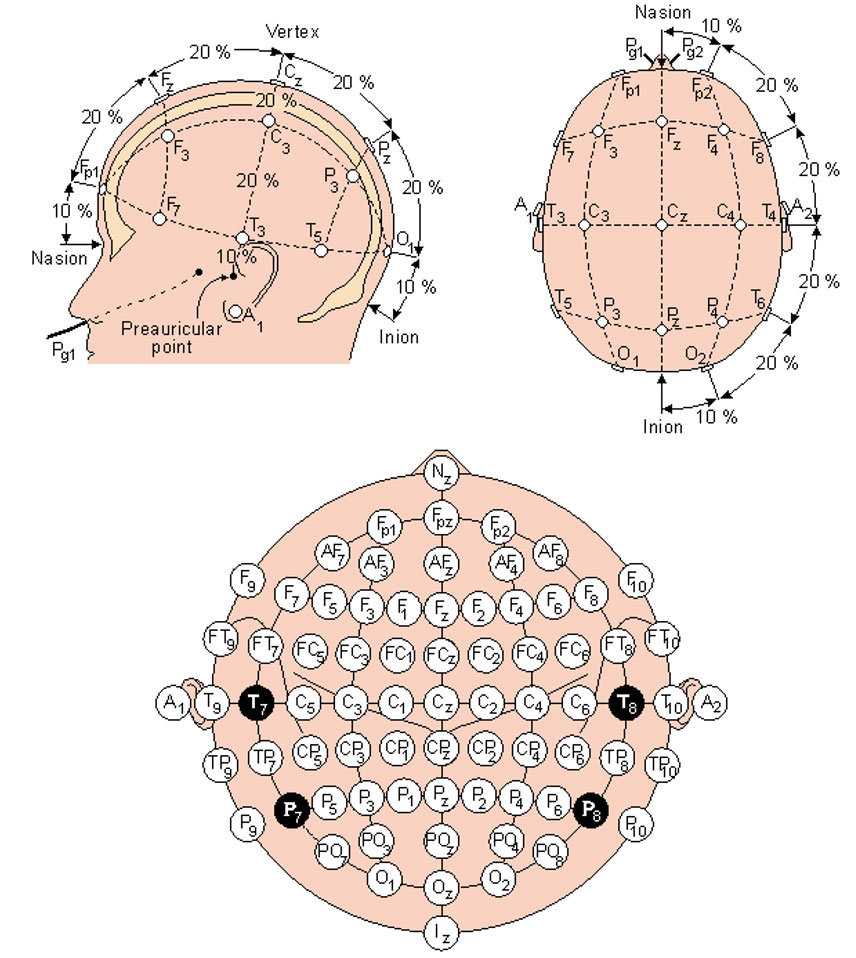 Figure 6: The 10-20 International System. This is an internationally recognized method to describe and apply the location of scalp electrodes in the context of an EEG exam, polysomnography, or lab research.

The child’s preparation is minimal, and the experiment is well tolerated. The entire session lasts about 2–3 hours with the actual measurements lasting around 60 minutes, depending on the study. In some cases, we ask parents to bring the child sleep deprived by either skipping a nap or waking them up earlier in the morning, and let the child go to sleep in our facility once the preparation procedure is completed. For research studies, we never use sedation for the recordings.

After completing the consent process, we measure the child’s head to identify the most suitable size HD-EEG cap that will be used for the recordings. The selected net is soaked into a conductive salt solution for 5 minutes to make the sponges that are attached to the electrodes conductive. Then, the HD-EEG net is placed on the child’s head. Our research team will then ensure that each electrode has good conductivity (Fig. 7). Additional electrodes may be placed on the child’s face and chest for recording electromyography (an electrical activity produced by muscle movements) and electrocardiography (electrical activity produced by the heart). 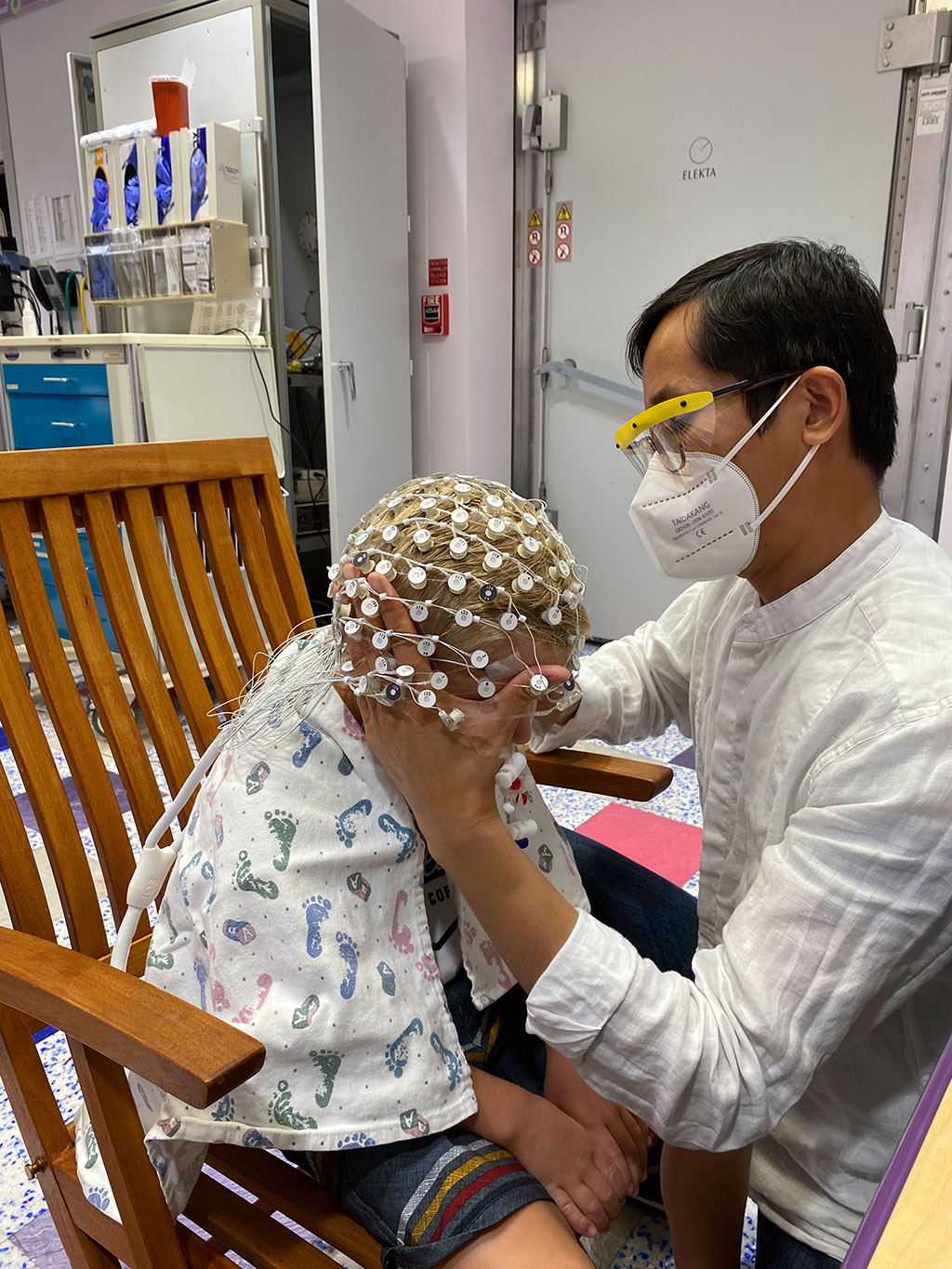 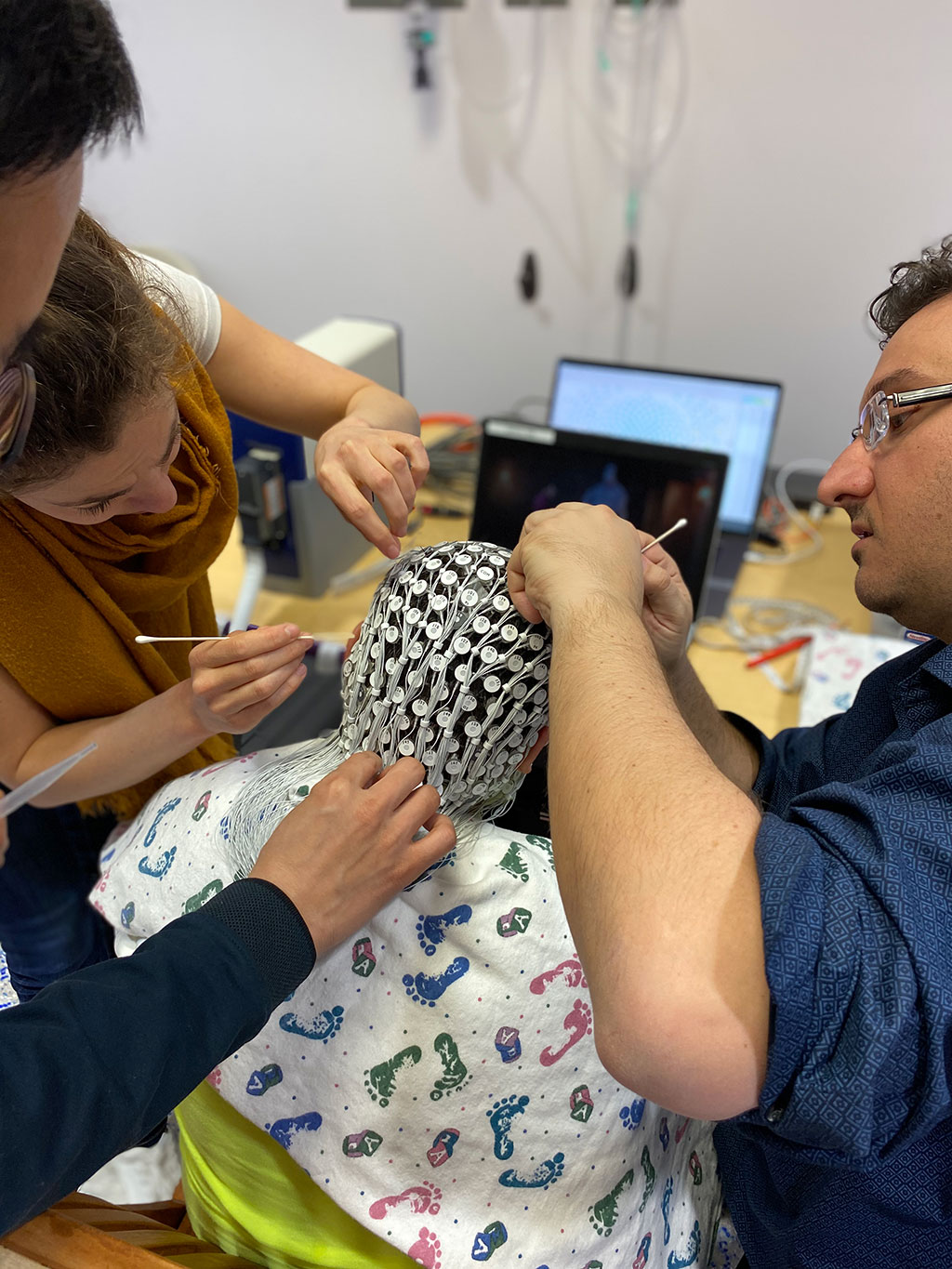 At the end of each recording, the co-registration procedure is performed. Co-registration is used to locate the relative position of child’s head with respect to the HD-EEG electrodes. A near-infrared spectroscopy tool is used to scan the locations of EEG electrodes around the child’s head (Fig. 8). The procedure lasts no more than 10 minutes and is quite enjoyable for the children. During this process, the child can watch their favorite movie, play a game on a tablet or watch the computer screen digitally re-create their head. 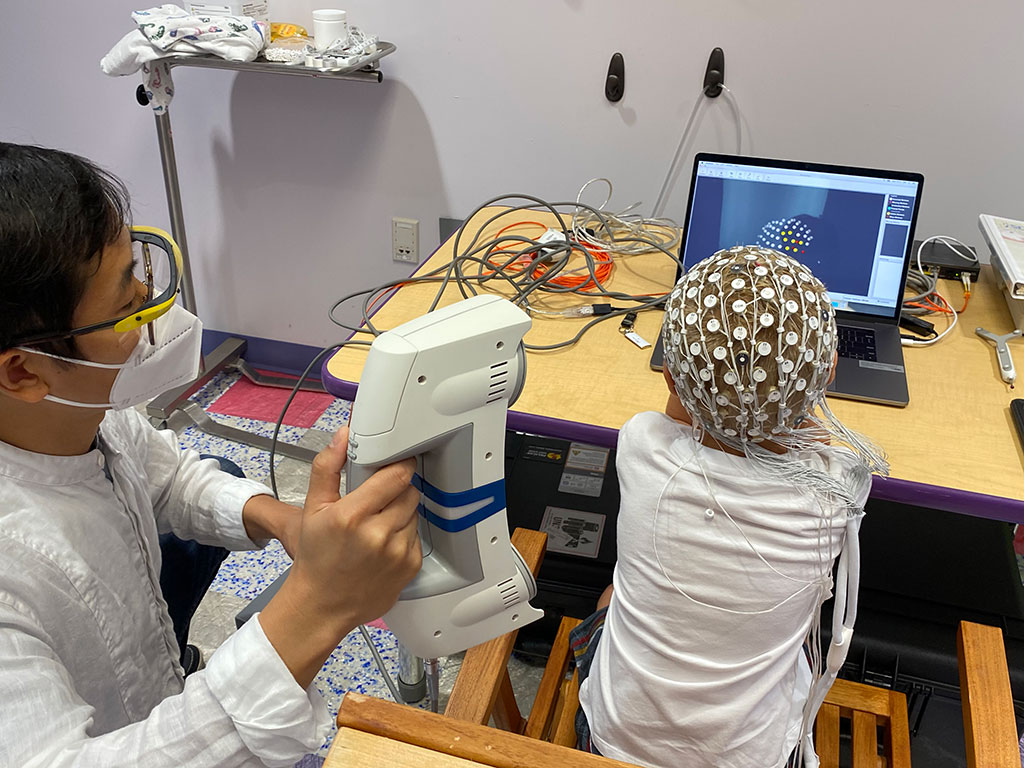 Figure 8: Co-registration process with the near-infrared digitization system. The researcher digitizes the relative locations of the electrodes with respect to anatomical landmarks on the child’s head.