Magnetic resonance imaging (MRI) is a non-invasive imaging technique used to take various detailed pictures of the body, including anatomy and physiological processes (Fig. 1). MRI is performed using a magnetic field and radio waves, not ionizing radiation like that of computed axial tomography (CAT/CT) nor radioactive tracers in the blood like that of positron emission tomography (PET). MRI works well because our bodies are made of cells which contain water (H2O – containing hydrogen ions - protons). The MRI scanner uses powerful magnets to excite and detect these positively charged protons, which allows us to see and take a picture of the tissues they make up. Excited atoms emit a radio frequency (RF) signal that is captured by a receiving coil. For imaging of the brain (neuroimaging), a head coil (like a helmet) is used. The rate at which the atoms return to their equilibrium state provides the contrast between different tissues (densities). MRI is widely used in diagnostic medicine and biomedical research. 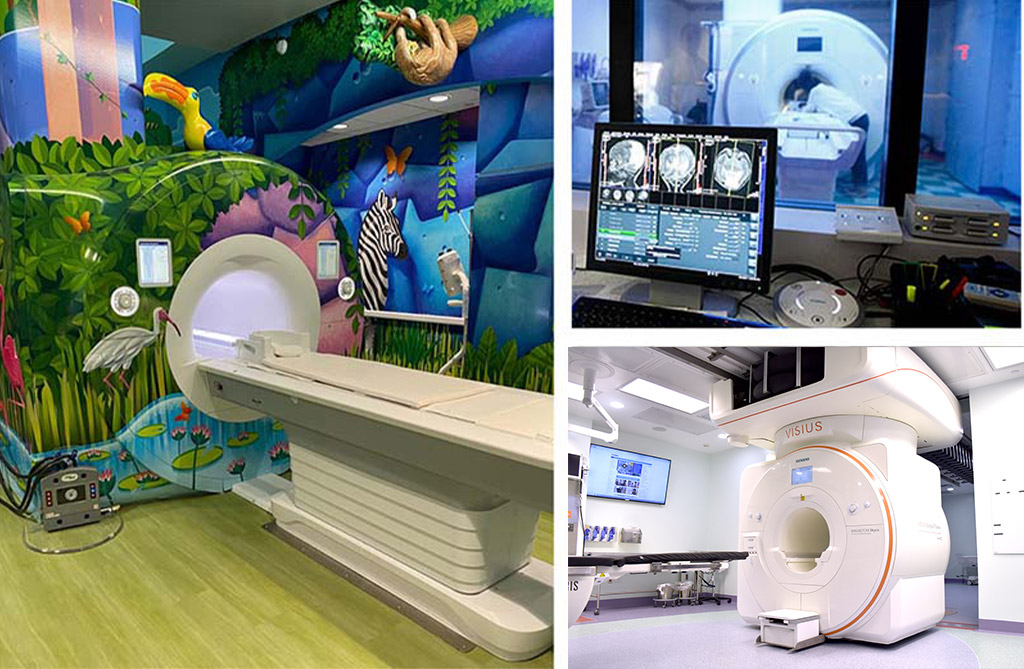 MRI provides excellent spatial resolution resulting in localization accuracy greater than that of other neuroimaging modalities (e.g., electroencephalography [EEG], magnetoencephalography [MEG]). Like that of EEG and MEG, the child may either relax and close their eyes, perform a task, or passively receive auditory or visual stimuli. MRI can be combined with EEG and MEG (and transcranial magnetic stimulation [TMS]) to provide better temporal resolution (to the millisecond) for brain activity, aid localization for these imaging modalities, and aid treatment targeting with TMS. In research, MRI can be used to identify both structural (tissue) and functional (physiological process) biomarkers of disease-state for treatment monitoring.

MRI can employ various pulse sequences (or magnetic weights) to act on and modify the contribution of different tissues of a structure. This generates a series of images with particular contrasts (image colors). Therefore, MRI does not require the use of contrasts agents to image structures or blood flow since the tissues and blood properties provide their own contrasts. Some of the most well-known and utilized sequences are the spin echo (T1, T2, and proton density), gradient echo, diffusion weighted imaging (DWI; e.g., diffusion tensor imaging [DTI]), perfusion weighted imaging (e.g., arterial spin labeling [ASL]), susceptibility weighted imaging (SWI), inversion recovery, functional MRI (e.g., blood-oxygen-level depended [BOLD]), and MR angiography (MRA). Some of these commonly used in neuroimaging research will be discussed in more detail below.

Generally, T1 and T2 weighted images are the most common (Fig. 2). On a T1-weighted scan, tissues with high water content will have lower signal (appear dark; e.g., cerebral spinal fluid [CSF]) and tissues with higher fat and paramagnetic substances will have higher signal (appear lighter; e.g., gray [bundles of neural cell bodies] and white matter [bundles of neuronal axons]). T1 images are great for demonstrating anatomy. On a T2-weighted scan, compartments filled with water (such as CSF compartments) appear bright and tissues with high fat content (such as gray and white matter) appear dark. This is good for demonstrating pathology since most, but not all, lesions (damaged tissue) tend to develop edema and are associated with an increase in water content. 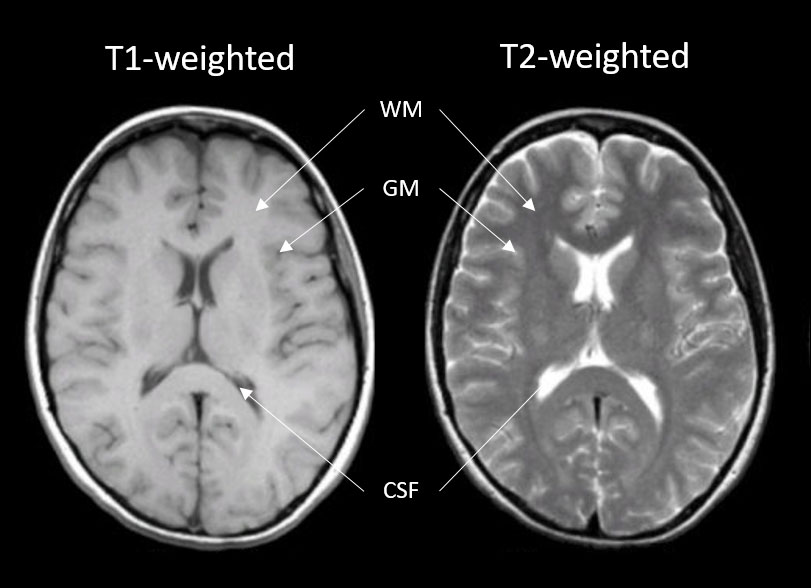 Structural MRI consists of scan sequences that provide images of the brains structure, allowing examination of the anatomy and pathology of the brain. These images can be used for clinical diagnostics as well as for research purposes. A few of the most common scans are detailed below (Fig. 3).

Functional MRI uses properties of blood to measure blood flow itself (via a magnetic-induced tracer) as well as brain activity (via oxygen properties). A couple of the most common are highlighted below. 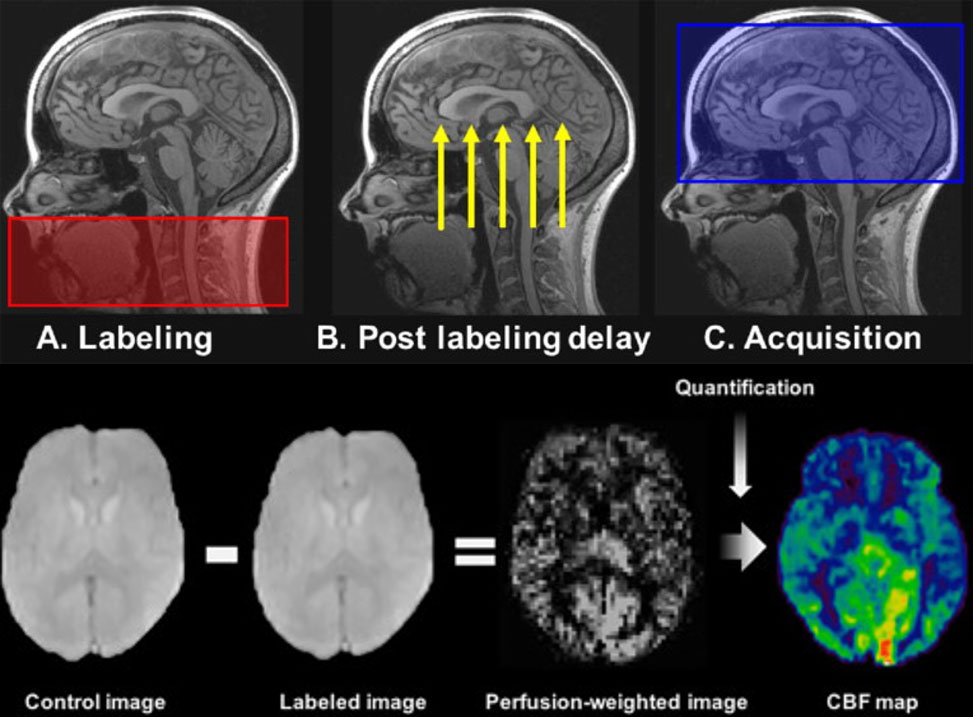 Figure 4. Visual depiction of arterial spin labeling (ASL) scan used to measure cerebral blood perfusion. Top: ASL scan phases, from pulse labeling (A) of water molecules in blood (in carotid artery) to the delay to let the labeled blood get to the brain (B) and the image capture (C). Bottom: example of the control image (no label) and labeled image used to create the perfusion-weighted image and cerebral blood perfusion map (CBF map).

Blood-oxygen-level-dependent (BOLD) fMRI - BOLD measures brain activity by detecting associated changes in blood flow. Specifically, BOLD relies on detecting properties of oxygenated and deoxygenated hemoglobin in the blood to see images of changing blood flow in the brain associated with neural activity. Neurons do not store their own fuel sources (e.g., oxygen), so when neurons activate, they pull what they need out of the blood, including oxygen. The change from oxygenated to deoxygenated blood in a given area is a proxy of brain activity MRI can detect. Neural activity can be measured using BOLD during a resting-state, not performing an explicit task, or an active state, when performing an explicit task, such as a cognitive challenge (e.g., working or episodic memory, reward, emotion, social cognition). BOLD provides measures of what regions are active when, and/or what functionally connected regions are active together.

However, prior to modern day MR scanners, nuclear magnetic resonance (NMR) was initially demonstrated in 1945. NMR is founded upon the phenomena that the nucleus of atoms in a magnetic field resonate when a secondary oscillating magnetic field is applied. In 1952, two scientists, Felix Bloch and Edward Purcell, used an NMR machine to observe the structure of different material structures, but not in humans. It was not until 1970s when three other scientists also developed techniques for creating MR images. Raymond Damadian’s (Fig. 5, top left) contribution involved the creation of a human scanner to examine humans based on the theory that cancerous and healthy tissues act differently than one another under NMR. Paul Lauterbur's contribution was the projection reconstruction method, which is partly used for motion reconstruction in modern MRI scans. Sir Peter Mansfield's (Fig. 5, top right) contribution was called line scanning, which involved scanning pieces of the structure and combining them to make the whole image. While cancer could be diagnosed in patients with MRI in the 70s, hospitals did not start using MRI machines for routine diagnostics until the 90s (mostly for musculoskeletal and brain abnormalities). MRI machines as we know them today (Fig. 5, bottom) gained their popularity in the 2000s alongside full body MRI capabilities. MRI machines and techniques are constantly changing with advancing science. 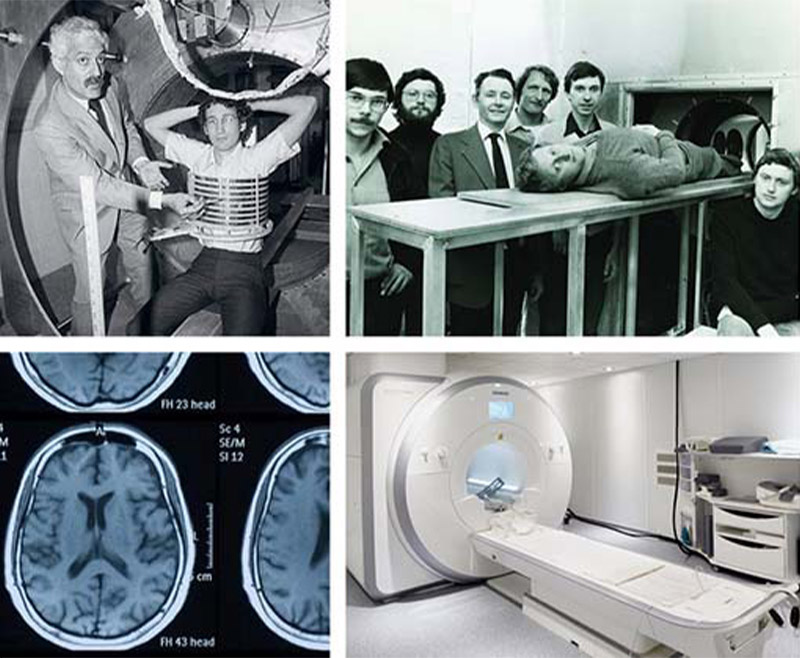 After consent and confirming that the child is eligible for MRI through a brief screening process, the child is informed on what they can expect during the MRI. If needed, the child will then be taught any tasks they will be performing in the scanner. Before going into the MRI room, the child will change their clothing to a non-metallic hospital gown. The MRI preparation when in the scanner room is minimal. The child will lay on the MRI bed with any cushions and blankets needed to be the most comfortable, then they will be given earplugs and/or headphones to help cancel the noise of the scanner around them (Fig. 6), and allow them to hear through the headphone speakers. If needed, the child will then be given any response button required to give us answers on the tasks. Lastly, the head coil (Fig. 6) will be placed over the child’s head, and the child will be slowly put inside the scanner. The child is monitored and talked to throughout the visit, and they can press the emergency call button provided to them if they need to get out. The scanning part of the session will last about 30-60 minutes depending on the MRI sequences collected.

Figure 6. Left: Child with both head phones and goggles on; Right: Head coil with Mirror to help them see outside or items projected for a task.

As with any other neuroimaging technique, MRI offers a unique set of advantages over the other imaging techniques (e.g., EEG and MEG). Compared to EEG, and much like MEG, preparation for MRI is relatively fast and easy. With MRI, images of the brain provide the greatest level of spatial resolution to that of EEG or MEG, which is why it is often used in those imaging modalities to provide better spatial information to their superior temporal (brain activity timing) resolution. One of the greatest advantages of MRI is that it can non-invasively provide a multitude of different images to understand both structure and function of the brain, which is unmatched by other imaging modalities alone.