Pediatric stroke is not as rare as many might believe. In fact, stroke is one of the top 10 causes of death for children, according to the Centers for Disease Control and Prevention.

People rarely think of children as being at risk for stroke. But the truth is, strokes can happen to people of all ages, even to babies in the womb. For children especially, strokes are oftentimes related to bleeding and clotting disorders. 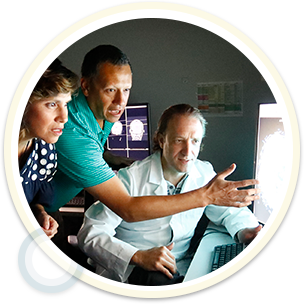 BE FAST to recognize the signs of Pediatric Stroke

Approximately six in 100,000 children are affected by stroke. Here in the U.S., it is a leading cause of death among children. Nearly 60 percent of childhood strokes occur in boys. Because the causes and symptoms are so different, treating stroke in children requires specialized training.

The causes and types of stroke in children are very different from those in adults. For children, common causes are often related to:

Ischemic strokes, the most common type in children, are usually related to:

Hemorrhagic strokes can be caused by:

Cerebral venous sinus thrombosis (CVST) is a stroke that occurs when a blood clot forms in the brain's venous sinuses, but rather than preventing blood from flowing into the brain, it blocks the blood from flowing out. This may result in blood leaking into the brain and causing a hemorrhagic stroke. CVST is a rare form of stroke that occurs almost exclusively in children, teens and young adults. Some causes or risk factors include:

Over the last 15 years, studies by the National STROKE Association have shown that there has also been an increase in strokes among teens and young adults related to certain disorders normally associated with adult strokes, such as:

While it can be extremely difficult to recognize symptoms of stroke in an adult, it is even more so in children. It is not uncommon for some types of strokes or after effects to go unnoticed. The brain is divided into two parts, the left and the right.

If your child exhibits any of these same symptoms or warning signs seen in adults, call 911 immediately:

Children, especially little ones, often cannot clearly describe the way they feel. Newborns and infants have no way of expressing their symptoms. If your child has been diagnosed with a disorder, illness or genetic disease or is undergoing certain treatments where stroke could be a possibility, it is very important to discuss a plan of action with your pediatrician and/or specialist. It is also critical to know these signs and take swift action if you believe your child is having a stroke. It could save his or her life.

If at any time you think your child is having a stroke, please call 9-1-1. It is better to not ignore the possibility.

Seizures are closely related to pediatric stroke and can become a continuing issue after a stroke. About 15 percent of seizures in newborns are secondary to stroke. In general, risk of recurrent pediatric stroke is low. However, children who have seizures often have a greater difficulty recovering.

Strokes are very serious and cause long-term and life-threatening damage. Because the brain is like a "command center" signaling all the functions of our bodies, a stroke affects other parts of the body.

The American Stroke Association reports that between 20 percent and 40 percent of children die after experiencing a stroke, and of those who survive, 50 percent to 80 percent may have permanent neurological deficits. Some of those deficits include:

Stroke is diagnosed through several testing techniques. Your doctor will perform a complete physical exam and check for problems with vision, movement, feeling, reflexes, speaking and ability to understand what is being said. Your doctor will also listen for an abnormal sound in the carotid arteries in the neck. This sound, called a bruit, is caused by irregular blood flow.

Advanced testing will begin with blood tests which may include bleeding time, cholesterol, sugar, clotting, and a complete blood count. Your doctor will also work closely with the neurodiagnostics team who will run one more of the following tests:

Just as the causes for stroke are very different in children than adults, so is treatment. Your child's plan of care will depend on the specific cause of the stroke, as well as other important factors such as age, size and medical issues. Some of the more common treatments stroke in children, teens and young adults include:

For a child with sickle cell disease, blood transfusions may prevent strokes from occurring or recurring. Your doctor will discuss any risks and help to determine if this course of treatment is the right one for your child.

The stroke and thrombosis team at Cook Children's has an outstanding track record in helping patients to recover and to regain as much of their mental and motor skills as possible. An amazing team with extensive knowledge of the types of disorders and issues that can cause stroke and treating those disorders in the tiniest of patients to young adults provides early prevention. And the chance to enjoy childhood and adulthood.

Cook Children's Stroke Program is a proud member of the International Pediatric Stroke Society (IPSS) which is an international network of several large pediatric institutions that are current world leaders in therapy and research in the field of pediatric stroke and thrombosis. Membership in IPSS has allowed Cook Children's to gain access to and participate in an international research trial that offers the most recent advances to treat acute ischemic stroke in children, including the novel use of a "clot busting" medication to reopen the obstructed cerebral artery and offer the best chance for children to have minimal to no neurological deficits.

Our thrombosis program is also a member of the Hemostasis and Thrombosis Research Society (HTRS) which enables us to provide the most up to date thrombosis diagnostics and management to inpatients, as well as outpatients through clinical trials, collaboration and networking with colleagues in this specialized field of hematology. We have also recently become involved in national initiatives for prevention of thrombosis in a variety of clinical situations and disease processes.

The American Stroke Association reports that between 20 percent and 40 percent of children die after experiencing a stroke, and of those who survive, 50 percent to 80 percent will have permanent neurological deficits. That means that strokes not only interrupt childhood, but can create challenges well into adulthood and old age, such as: